As the lockdown remains in place for some we've been experimenting with various formats, the latest being a fully remote gain using Zoom (other packages are available). Below a few shots from our first game, played in about 2 hours with 2 players aside and 2 Umpires. The result was an Allied win as the bold French attack found itself overextended.

The rules are included at the end. The format seemed to work which was the main purpose of the first try. The rules now need a few tweaks to even out the kinks and encourage attacking play. 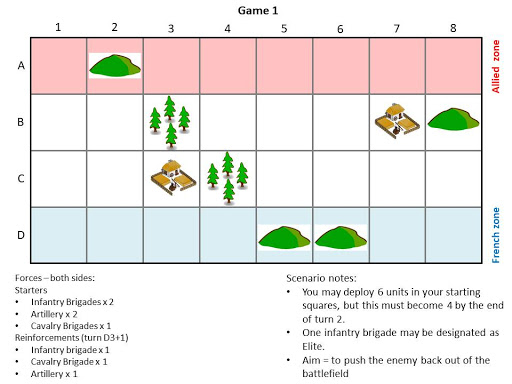 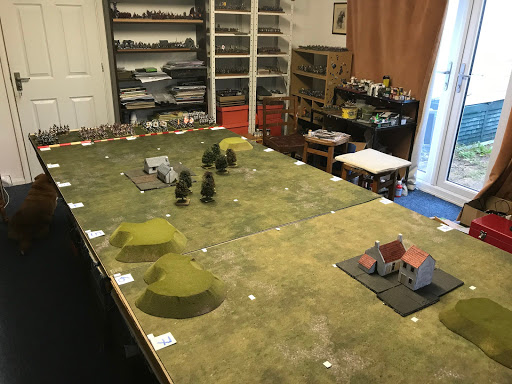 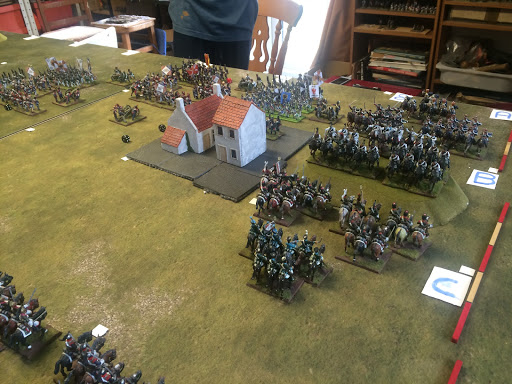 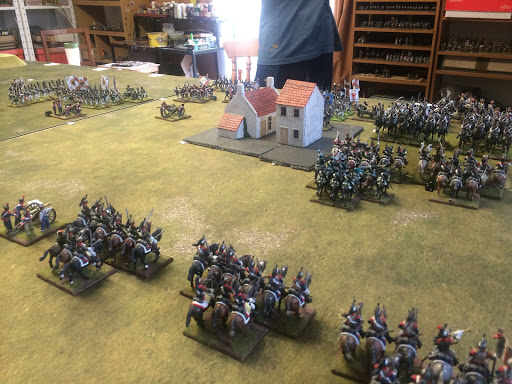 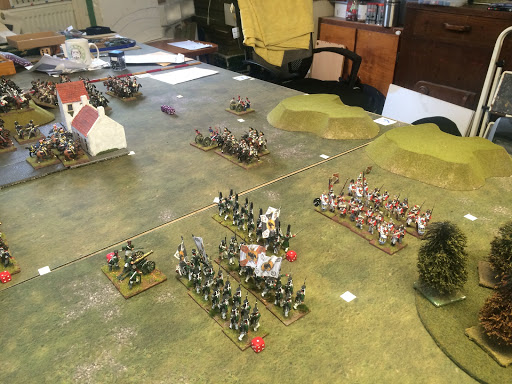 Basics – the game is played on a grid of 1’ squares. A maximum of 4 units from each side may be in a square. The squares can be numbered to speed play. 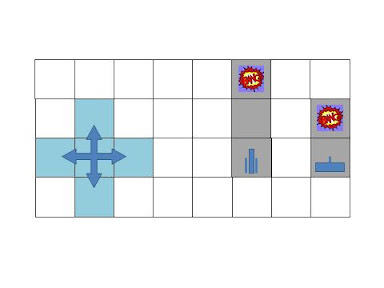 Foot and guns = 1 square, mounted = 2 squares. Guns may not fire and move. Assaults are always 1 square inc cavlary. All movement is horizontal or vertical only, no diagonals.

Each unit roles 3D6 and arranges in order of scores. Each pair won is a hit the enemy. Units are removed when they take 3 hits. Units should line-up 1 -1 where they can, reflecting their position in their own square. Additional units enable you to outnumber the enemy, but the damage is all taken on the primary unit. Note that artillery can only be damaged by units in range of them and Cavalry winning rolls cause no shooting damage.

Infantry are organised into brigades of three battalions. The frontage / depth is not important other than visibility on camera and the ability to fit within a 1’ square. We will use 4 * 40mm bases.

Cavalry are organised into brigades of three regiments. We will use 4 * 50mm or 60mm bases. Guns are in batteries of 2 models.

The basic setup is that two umpires undertake the movement on behalf of the remote commanders. There are three Zoom rooms required, one each for the sides and a third for the battle field. This third room is open to all players at any time. The team rooms are only used by that side and their assigned umpire. 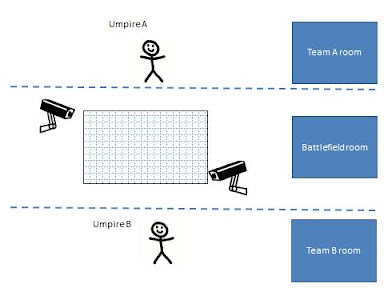 The battlefield room will be hosted by the Umpires. The team rooms could be hosted by each sides C-in-C or be sub rooms of the main room (this means the umpires must move people).

The turn sequence is:

1.  1. Teams and their Umpire meet in the team room where orders are issued for the various units. These will be movement, shooting and assaults. A time limit or unit limit may be imposed to speed play.

2.    2. All move to the battlefield room where the Umpires play through the turn with simultaneous movement and the players watching but not intervening.

a.    Assaults that clash take place at the border with the winner capturing the losers square.

b.    Where movement clashes roll-off with mounted +2 vs foot.

3.    3. The Umpires will call-out casualties as they play through but the players must decide how they will monitor unit health.

5.    5. Any reinforcements or scenario conditions are announced.

Where possible, maps of the battlefield will be issued in advance to all players along with the forces and scenario details. Initial dispositions must be submitted by the C-in-C on the morning of the game. If not then units will have to march onto the table down roads, with a maximum of half the troops each turn.

As this is Kriegsspeil-based all situations not cover by the rules will be determined by the Umpires, usually rapidly with a dice roll!