Whilst browsing through a few scenarios I came across one that I thought could be easily adapted for  planned game this week as it featured the troops we had available for a Muskets and Marshals game.

"The Battle of Montmirail (11 February 1814) was fought between a French force led by Emperor Napoleon and two Allied corps commanded by Fabian Wilhelm von Osten-Sacken and Ludwig Yorck von Wartenburg. In hard fighting that lasted until evening, French troops including the Imperial Guard defeated Sacken's Russian soldiers and compelled them to retreat to the north. Part of Yorck's Prussian I Corps tried to intervene in the struggle but it was also driven off. The battle occurred near Montmirail, France during the Six Days Campaign of the Napoleonic Wars." 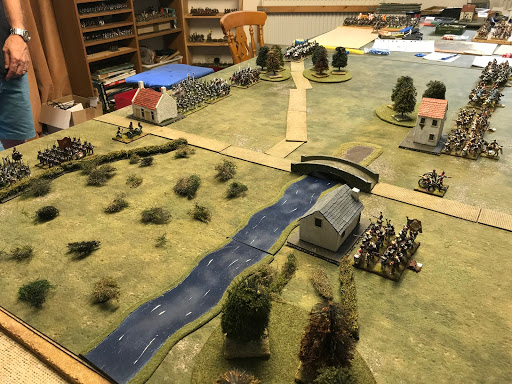 The terrain comprised three small villages, with control of two being needed win the game. The area to the east of the road was difficult terrain  (half speed and no guns) as it had become flooded following several days of heavy rain. The two sides were scaled right back to fit the space / troops available

The Russians deployed a couple of units in the east to keep the French honest. Their guns and the  of the  balance of their infantry in the centre and their cavalry to the west looking to out flank the French around the woods. The Prussians were delayed and so would arrive after a couple of turns. 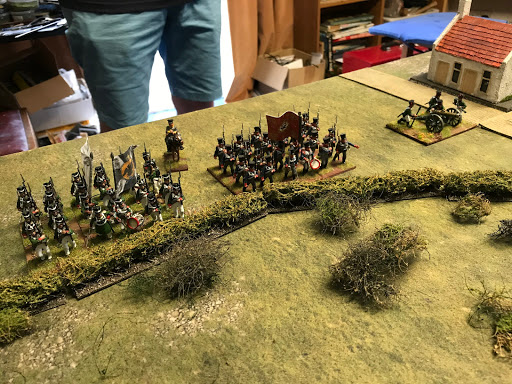 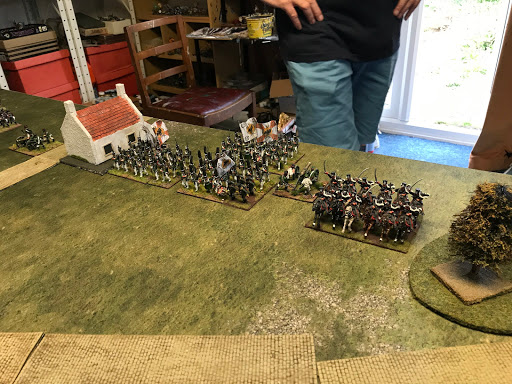 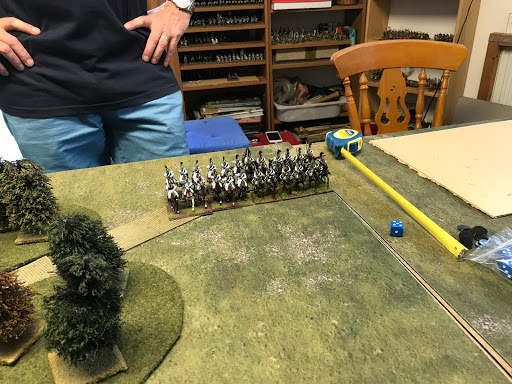 The French conscripts huddled in cover awaiting the arrival of the Guards, whilst the cavalry lined-up opposite the Russians to secure the western flank. 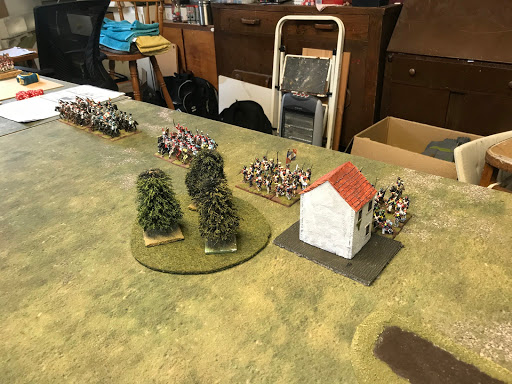 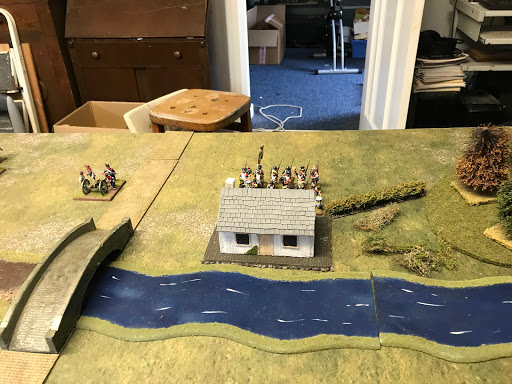 The first action was in the west where both sides cavalry clashed head-on. Initially the French Guards were pushed back and it looked like the flank may be turned, so part of the Old Guard were assigned to hold that side. Centrally the Allied infantry pressed forward with the French gunners causing very little damage, no doubt due to the soft ground. 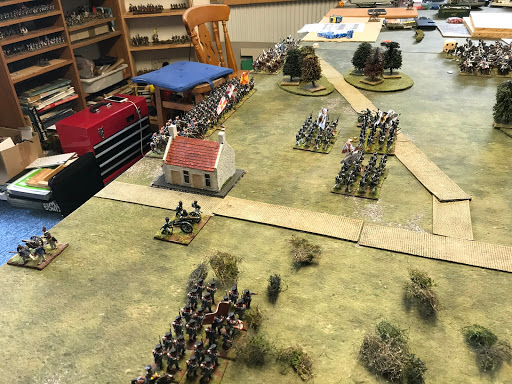 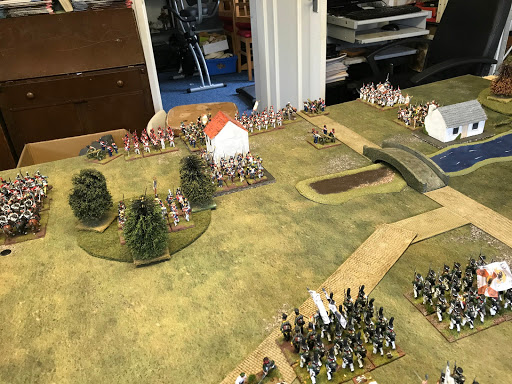 The French cavalry soon regained their composure and were able to rout the enemy after about 4 turns heavy fighting, so securing the flank and preventing at advance by the Prussians deployed  there as they were forced into square. 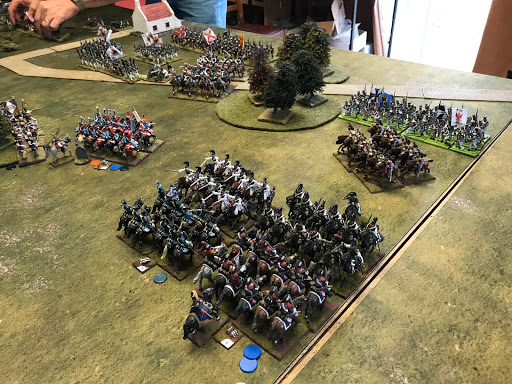 As the Allies came on, the French used the time to deploy into a defensive line protecting the central and eastern village. Their own guns continued to proved ineffective and made little impact on the advancing Allies. They by contrast destroyed a French battery and badly damaged a second in this approach phase. 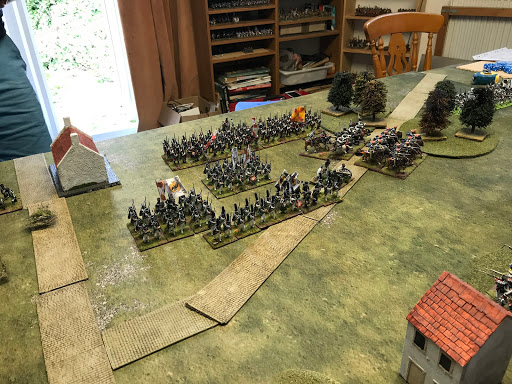 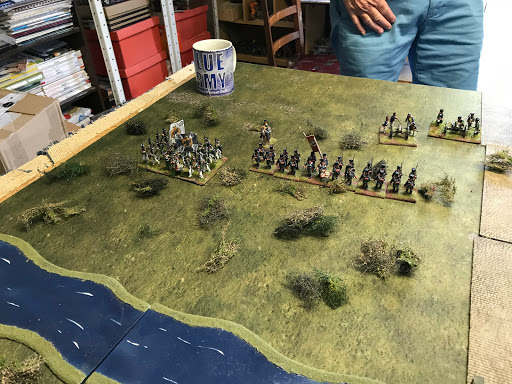 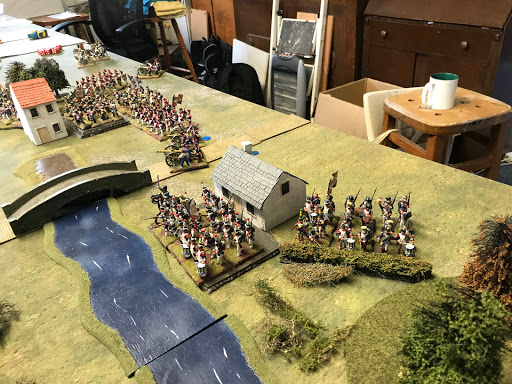 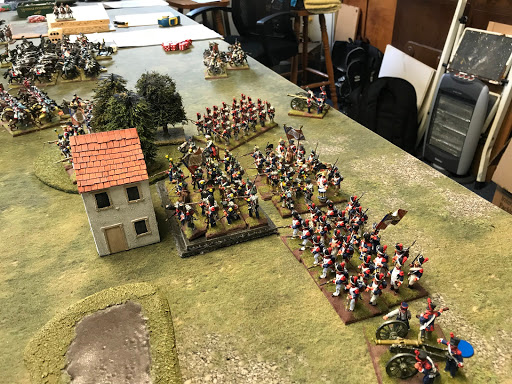 Sadly the battlefield layout meant that the Old Guards and Russian Grenadiers never faced each-other. The Russians boldly charged some conscripts holding a wood on the west of the French position but were easily routed with combined fire from them and the Middle Guard in the central village. 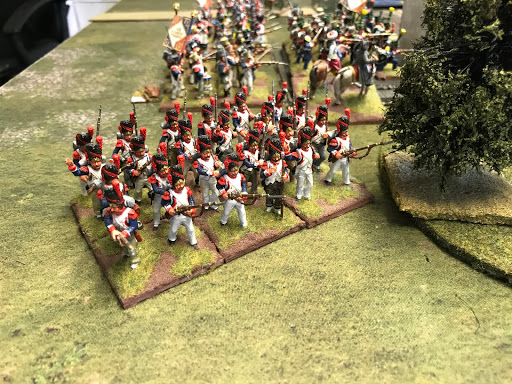 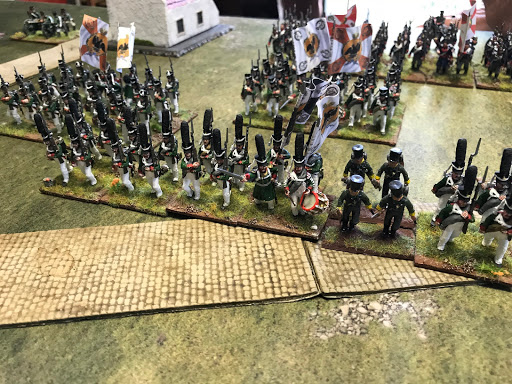 The western flank had now become a stalemate - the Prussians were stuck in square but the French cavalry lacked the support to shift them. It was though a situation that suited the French as it meant the western flank as secure so they could focus on the centre. 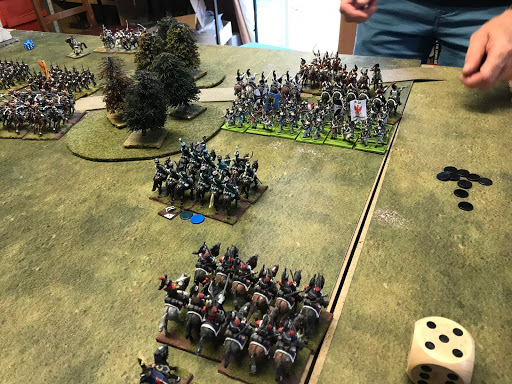 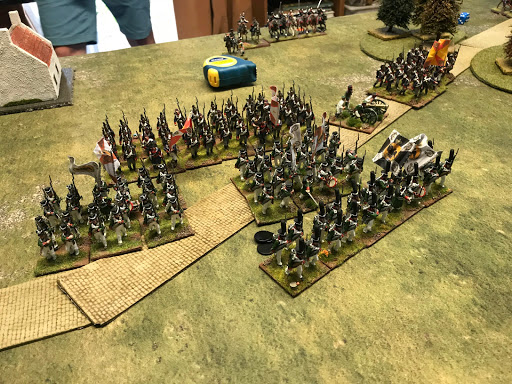 So as the day drew to a close the Allies lined-up for their main assault on the central village. Some close range fire destroyed an Old Guard unit but the Middle Guard in the village were to volley away a couple of attacks and so end the game in control. With the eastern village never seriously threatened it was 2-1 to Napoleon. He was though unhorsed when the Old Guard were destroyed and was lucky to escape. 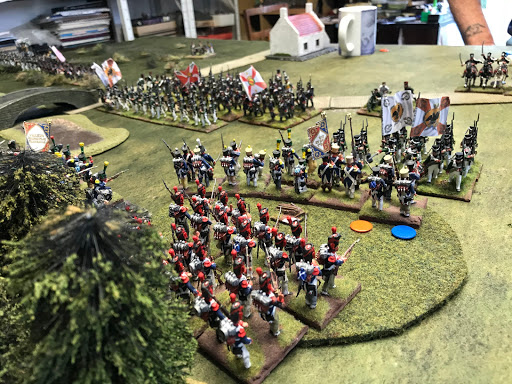 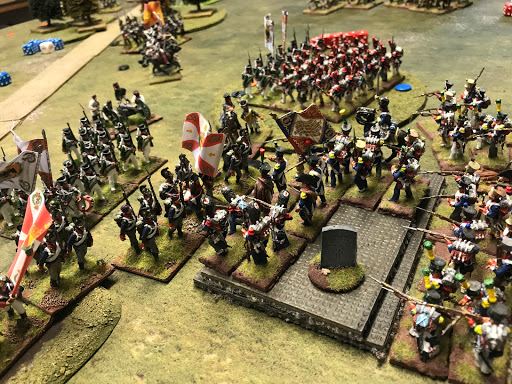 So a nice big game fought over about 4 hours play. The French guns proved pretty ineffective but the cavalry were able t0 hold in the west and force the Allies into a narrow attack that did not make the best of their numbers.