This years all-day game will be Lutzen so this week we had a quick trial of the rules before the big day. We've opted for Tercios by a Spanish company and seems to have some Kings of War concepts included, which was also first developed in Spain I believe. 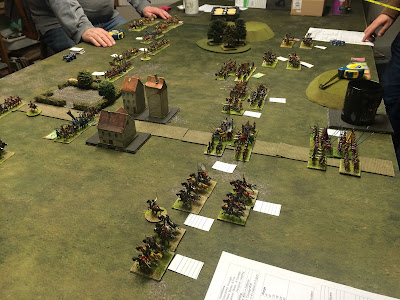 Basic units are infantry regiments or cavalry squadrons with guns, commanded detachments and dragoons sprinkled in. They are intended to be fast play so the basic mechanics are pretty simple. 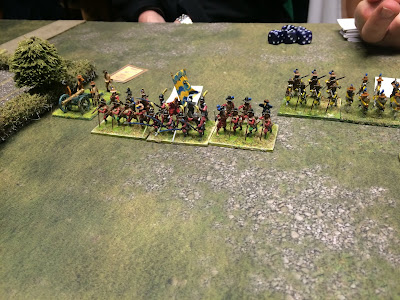 Units are allocated orders (Ready, Fire, Double, Assault, or Resist) denoted by cards placed for each unit or brigade. Units activate one at a time revealing their orders, but the twist is that a unit that has yet to activate may react to an enemy activation if they assault you, shoot you, or come within 3".

The outcome depends on the orders for example assaulters gain a bigger bonus in melee if they activated than they do if reacting. Conversely though Fire orders give a bigger bonus if you react but at the expense of being shot first. So part of the game is guessing who may do what an maximising your activation.

Both combat and shooting involve the attacker rolling a number of D6 and trying to achieve a score determined by the type of troops e.g. cavalry tend to be easier to shoot than infantry but harder to kill in melee. The defender then takes an armour save with failures being accumulated as Disorders. Typically you would acquire 1-3 per turn and 4-6 are enough to give a decent chance of a rout. So combats / fire combats last a couple of turns usually. 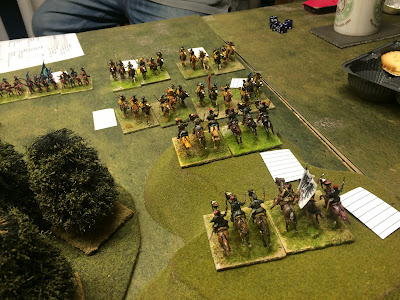 Movement, shooting and fighting factors are reflected in "advantage" or "disadvantages" e.g. horse vs formed pike get a "disadvantage". These are totalled and the overall score applied - typically an "advantage"  gives you a 50% boost and a "double advantage" a 100% boost, conversely a "disadvantage" will be a 50% reduction. Most factors come from terrain or the order cards so there are only a few to remember. 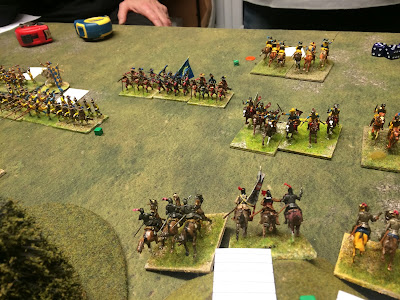 The game is pretty quick to learn and the key seems to be to have the right orders on the right units, much more than it is to activate in the optimum order. The older Spanish style infantry have lower firepower than the new Dutch system but higher morale. Similar the older Cuirassier cavalry have some shooting good morale but are less effective than newer systems in melee. Guns do little damage but can disrupt the enemies formations for others to exploit.

I've also found a bit of time for a terrain project this Christmas. I wanted fortress large enough for my KOW figures to populate on their multibases. This is from black foamcore and some cardboard offcuts. 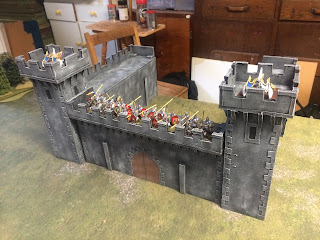 The garrison is Byzantine / Basilean on this occasion. 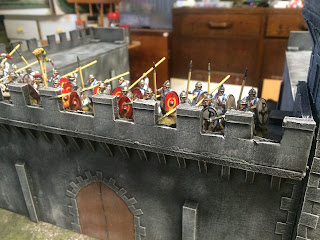 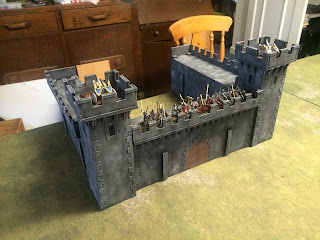 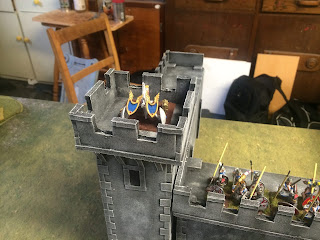 Email ThisBlogThis!Share to TwitterShare to FacebookShare to Pinterest
Labels: Review