Our next campaign is going to be French & Indian Wars in mid -1700's North America. This week we had a quick practice game to remind ourselves of the game. The game is card-based but with variable numbers of cards per unit. For example light infantry (the most flexible troops) each have 3 cards allowing a single action, where as regular infantry only have 2 cards but each allows 2 actions.

For this game we played French vs British. The more elite French fielded a unit of Marines, a unit of militia, a unit of Indians and a unit of regulars. The British had regulars, lights, militia and 2 units of provincial troops.

The battle centred around attempts to capture a remote farm occupied by and America colonial (lets call her Meg) and her family who were seeking a quiet life. 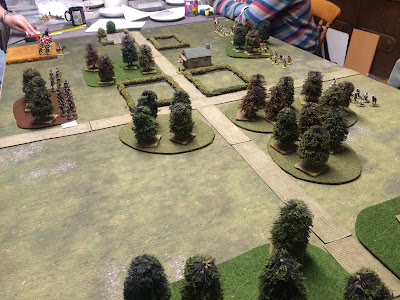 The progressed well with the French perhaps ahead on casualties inflicted