We often try out new games between longer campaigns and so this week we tried-put What A Tanker from Two Fat Lardies. Its a tanks-only skirmish game for 15 - 28mm played with a few vehicles aside.  We went with a Marder II, Hetzer, and Panzer IV vs two Shermans and an M18.

The rules use an activation system similar to Chain of command - you roll 6 dice and these give actions. 1's = a move, 2's  = acquire targets, 3's = aim, 4's = shoot, 5's = reload and 6's = wildcards that can be used as another number. So what you can do each turn varies with the dice but some tanks can influence this e.g. tank destroyers can turn any dice into an aim. 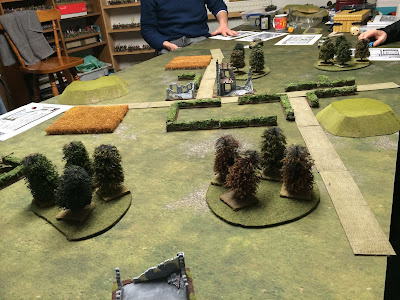 Shooting is done by throwing D6 based on your Strike value and then saved rolling D6 based on your armour. 3 unsaved hits in a turn kills you outright with lesser numbers of unsaved hits damaging you instead. Take the Sherman; its Strike 7 hitting on 5,6 from the front and armour 6 saving on 5,6. Side or rear hits are easier but you can see that head-on outright kills are fairly unlikely so its more a battle of attrition. 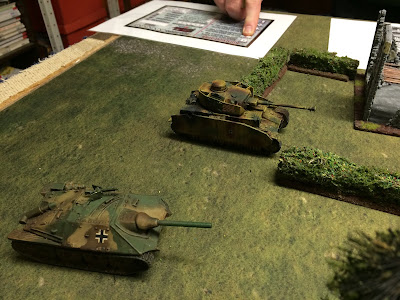 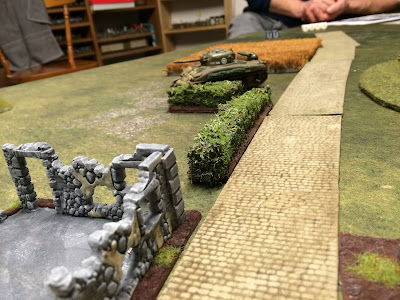 The games plays smoothly enough and we got the hang of things pretty quickly. We'll play agaon I'm sure. Its highly stylised for example there is no reserved fire to make you attack and there are no soft skin or wheeled vehicles.