For our Christmas holiday game this year we fought Lutzen - one of the key battles of the Thirty Years War, and the one that claimed the life of Swedish king Gustavus Adolphus. A too-and-fro affair historically, it was a narrow tactical victory but a greater strategic win as it prevented the Imperial forces under Wallenstein from invading Saxony.

Our refight was done in 20mm using the Tercio rules we tried out earlier in the week. The Imperial forces began on the defences but were expecting a relief force of cavalry to arrive on their right. The Swedes had a mobility and firepower advantage but were generally less good at grinding combats or protracted firefights being smaller units. 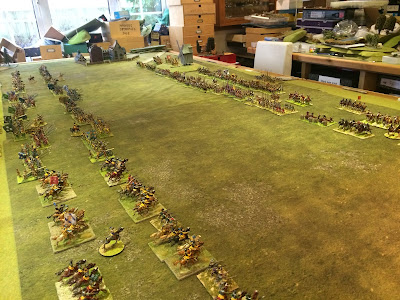 Seeking to maximise their initial advantage the Swedes attacked on their left and pushed into shooting range in the centre. The immediate arrival of the Imperial reinforcements prompted a more cautious advance by Gustavus Adolphus on the right. 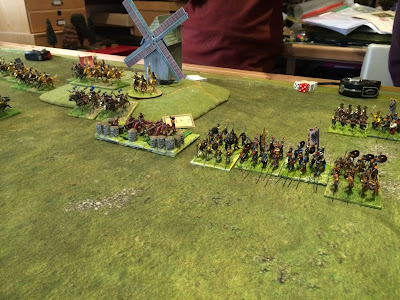 On the left the Swedish horse pushed the enemy aside and advanced past windmill hill whilst the command shot occupied Lutzen. The centre became a fire combat which was obviously favouring the more modern Swedes. However on the right the hordes of Imperial cuirassiers drove the Swedes back and began to weaken that flank. 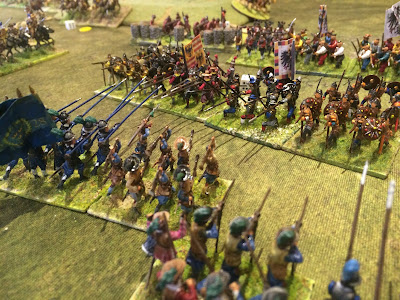 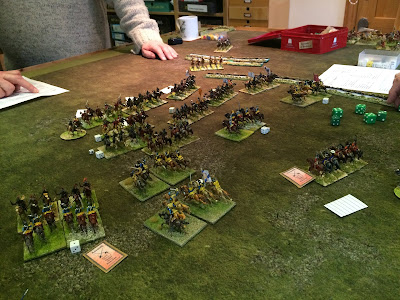 After a couple more turns the Swedes had largely won the left and threatened the Imperial on Windmill Hill. Fearing they would simply be shot to pieces the Imperial tercios charged forwards. They routed a couple of Swedish units but most were destroyed by concentrated musket fire. 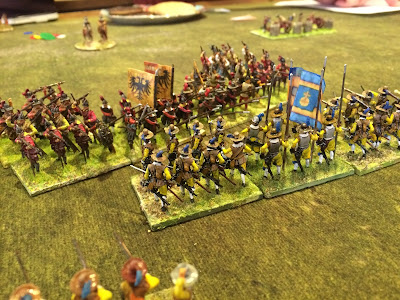 On the right Gustavus was able to stabilise the flank - it was not a winning position but did buy time for the centre to defeat the Imperial infantry. He even managed to survive unharmed! 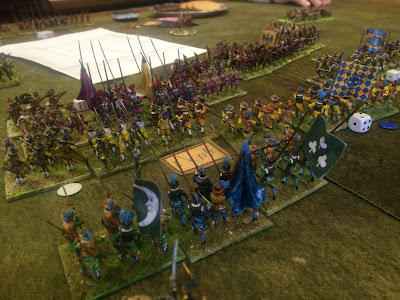 The final result was a Swedish win with the Imperial right and centre largely routed.

The game progressed rapidly and we certainly were able to fight to a conclusion within about 4 four play (not counting setting-up time). As always Châteaux  Boss provided a convivial atmosphere and excellent vittles' for the seasonal game.