As we're unable to meet at the moment we tried an experiment this week using DBA and a gridded board. DBA should work ok on a grid as the game is all about lining-up and is very simple anyway. I found a set of very simple movement adaptations on line that we used.

The setup was a pretty simple one. I used my standard 40mm based ancients as the elements - since its grid-based the depth does nt matter unlike regular DBA. The board was carpet tile marked with tape and the terrain similar - greed for rough and red/brown for hills. I also have some streams. 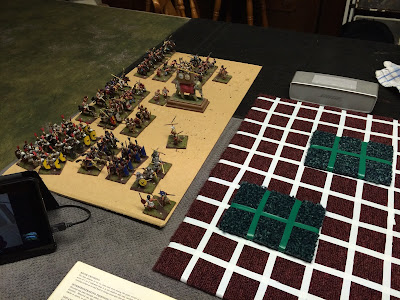 One camera/phone was setup on the board and a second was used for me to communicate with the remote players. I has to compromise visually to make the grid visible. 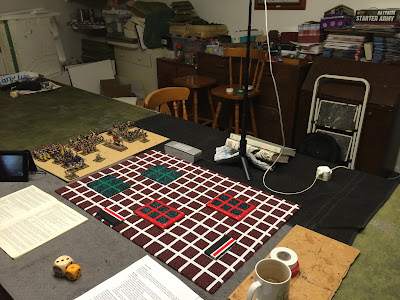 We played through two games; Carthage vs Rome and Carthage vs Gallic. Both were done in about 30mins giving plenty of scope for a fast-moving campaign. The troops are ne always easy to make out but that can add to the fun and the umpire can always help. 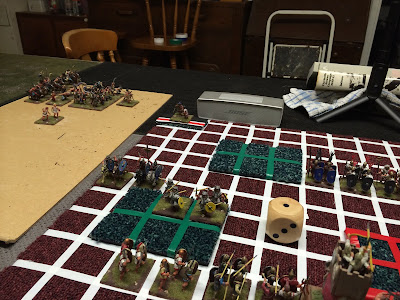 Our main refinement will be to buy some additional 30mm dice as regular ones are just too small to e visible. 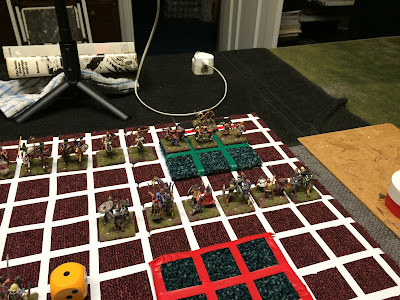 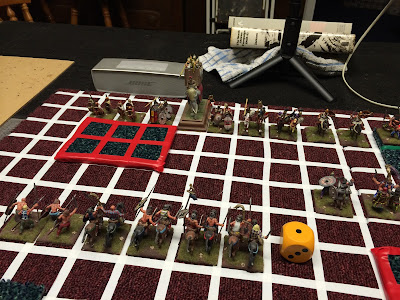 All in all it worked pretty well and is certainly a viable option for online play. The next step will be to run two games at once, which will need an additional camera and umpire. Under current rules one person could visit and play the second table.

Plan B could be a larger game with allied contingents  but it may be hard to see the whole table.

Email ThisBlogThis!Share to TwitterShare to FacebookShare to Pinterest
Labels: Ancients