As the British lost their first battle (Game 2), like the Russians before them, they were forced to stage a retreat from the battle field with the Burpha in hot pursuit. The scenario was therefore the same as last week - the British had to retreat off the far end of the table having sprung the Burpha trap.

The Brits tweaked their army list a little - the gun was traded-in to upgrade the cavalry to Lancers and to add a unit of Irregular infantry, which we modelled as recently arrived troops from England still sporting their red coats.

The British began is square but their plan was to rely on movement not firepower. The Bengal Lancers and most of the infantry would try to march off whilst the gun and 2 infantry would form a rear-guard. The key was not to stop, so the Burpha could not overwhelm them. 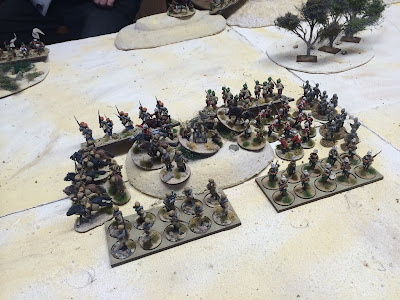 Things did not get off to an auspicious start as the Lancers and one of the infantry failed to move in the first turn, opening up some gaps in the formation. 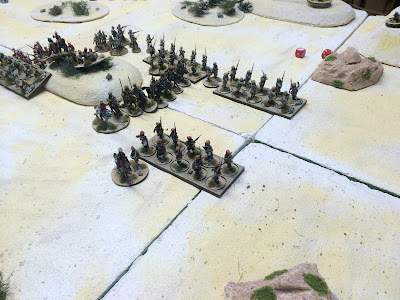 Into this gap gleefully leapt some Burpha cavalry. Accurate Burpha rifle fire pinned the defending Brits, placing them at a disadvantage in the ensuing melee. The hapless British were destroyed by the Burpha in the follow-up melee, leaving a gap in the formation as  a second unit of horse appeared.

The trouble at the front of the column forced the advance to halt and the British to begin exchanging fire with the Burpha missile units. Whilst the Brits did ok having halted the Burpha infantry began to close-in on the rear of the now halted column - just what they wanted to avoid.

With casualties mounting from Burpha rifle/artillery fire, the British found themselves under sustained attack from Tribal Infantry with units routed one-by-one.

The battle ended with heavy Burpha losses but the British column virtually wiped-out more-or-less in their starting position. The plan was a decent one but the advance became bogged-down  early on and some good rolling for the Burpha shooting really took its toll on the British by pinning them consistently.

Our general feeling was that the western forces need a bit of a boost to make them competitive. A couple of options occurred:
1. Make their shooting better - say 4+ to hit
2. Allow reserve fire - a very major change we parked for now
3. One not discussed but in the game, is to give the Regular troops a plus for the pinning and morale tests to they are more resilient.