Having lost the first battle the Russians were forced to retreat from the battlefield back towards their base of operations. They found themselves ambushed on the road as they pushed through a valley floor.

The scenario was a simple one - the Russians had either to break the Burpha attack or move as many people off the table end as possible. The Russians adopted a mostly defensive square formation in classic Colonial style, while the cavalry made a break for the hills. 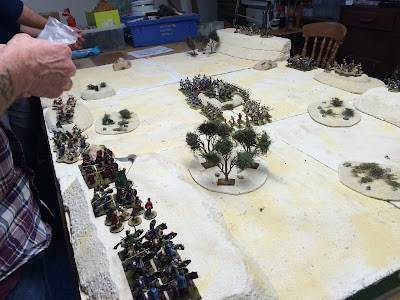 The initial fire from the Russians was effective in suppressing Burpha rifle fire forcing them to move forward with their assaulting troops. A key focus was on the end of the Russian square furthest from the escape point. Early in the game causalities were mounting for the Burpha and unit of Russian cavalry escaped scoring 3 VPs.


Another boldly charged up the valley sides routing a unit of riflemen and capturing a gun. Meanwhile in the valley floor the Russians were forced switch fire from the Burpha rifles to their combat troops. They repulsed several attacks but in turn began to take casualties and found themselves pinned a few times.


The pins proved crucial as they allowed the Burpha to attack the narrow wend of square and make inroads into the Russian ranks. As the attacks intensified the square began to crumble at the end opening-up the space for further attacks. 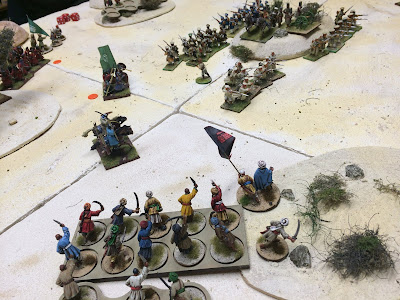 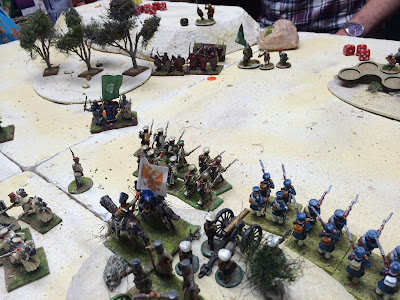 A combination of rifle fire and relentless assaults eventually over whelmed the square losing the Russians 10 VPs. So the final result was a 10-6 win for the Burpha and a third straight victory

It was a funny old game to be sure. Initially the Russians seemed in control and were easily supressing the Burpha fire. As the attacks grew though they had to switch targets and became overwhelmed. Perhaps the cavalry should have stayed and fought for longer, thus wiping-out a sizable part of the attackers shooting units?