The first game of our new campaign saw the Russian Imperial forces undertaking the Seek and Destroy scenario. The Russians get 3 VPs for each house destroyed by shelling/melee and the Burphas 2 VPs for each building intact or Russian unit routed. We upped the forces to 48 points a side as we had 6 players.

The Burpha's deployed the bulk of their melee oriented Tribal infantry in the buildings and looked to pushed the remaining forces forwards to relieve them. The Russians focused most of their forces centrally with their horse on the left flank. 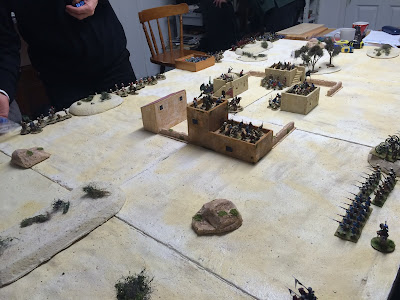 The early moves saw focused volley and artillery fire hit the Burphas hard, with units rapidly reduced to small size whilst the relief forces toiled across the table towards them. At this point things looked bleak for the Burpha but this battle is about time not casualties for them. 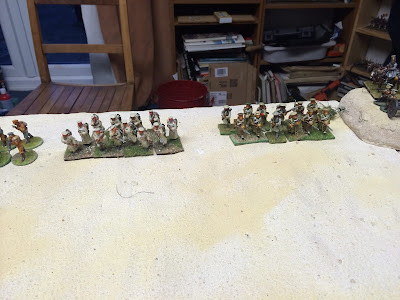 About 6 turns in (half way through) the Russians has succeeded in defeating about a third of the Burpha but had not destroyed any houses and had not advanced beyond their base edge. With the Burpha beginning to close-in they began a cautious advance towards the town. 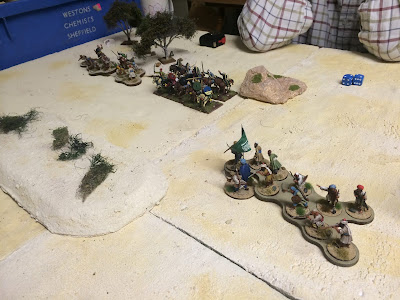 The Russians managed to launch a couple of attacks on the town but were unable to shift the fresh Burpha units that had reinforced the area. They were well ahead on the casualty count but still had caused no meaningful damage to any of the houses save one on 7 hits (10 needed to kill) from artillery fire. 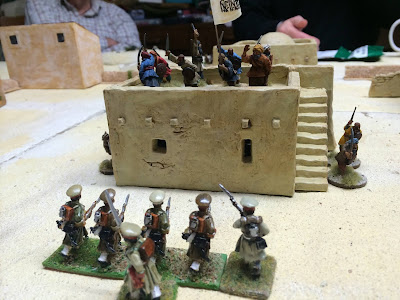 By move 10 it was clear the attack had bogged-down and there was no way they could  destroy the 3-4 houses needed for the win. so a solid Bupha victory on points - they lost about half their forces for little damage to the Russians, but the later were too slow advancing to have a realistic chance to win the game. 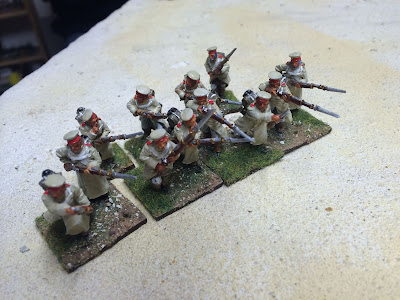