A busy Easter weekend concluded with our second battle of the Great Game campaign using The Men Who Would Be King. The first engagement for the British was Get of my land, where the British had to patrol through a series of 6 zones looking to capture objectives along the way. There was no turn limit. 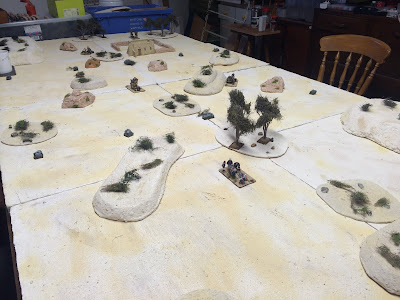 The British deployed tight on their right / centre leaving the left flank empty. The Burphas were required to deploy all non-Tribal units (before the Brits) with the remainder held off-table but assigned to one of the 6 zones. They spread-out evenly with their riflemen seeking to protect the objectives.


The British initially hugged the table-edge in a tight formation and opened-up a withering fire on the Burpha ranged troops. Shooting first they were lucky enough to chain together pins on the Burpha, meaning there was almost no return fire from their hapless foes. 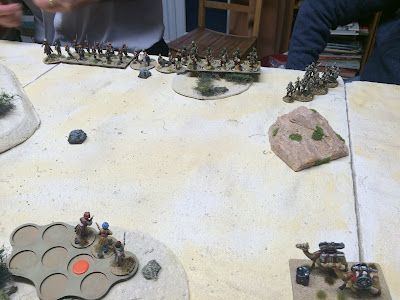 With most of the visible enemy heavily damaged the British began their advance towards the objectives, lead by the Bengal Lancers (counting as Regular cavalry not lancers). They pushed past the first objective without stopping and on towards the second, hoping to force the Burpha to deploy in the open.  Meanwhile their foot-slogging compatriots cautiously advanced. 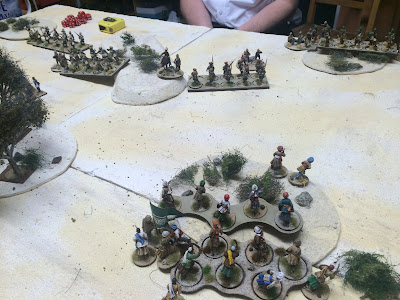 A gleam in their eyes the cavalry charged a unit of Burpha tribesmen (Fierce) that had freshly arrived. They pushed them back but took 60% losses. They charged again but were swamped and wiped-out.

The follow-up units had a run of poor dice and were unable to move and so stood stalled in touching distance of the objective. Meanwhile on their left a large Burpha force that had been unengaged due to the British deployment finally closed-in on the their flank.

Critically the Burpha riflemen managed to pin the British and so the follow-up Burpha charge was able to wipe-out most of the unit guarding the flank. In a crucial move the British supporting unit decided not the fire but instead to move to block the flank.  A second Burpha charge badly damaged that second unit and turned the flank. We declared a Burpha win. 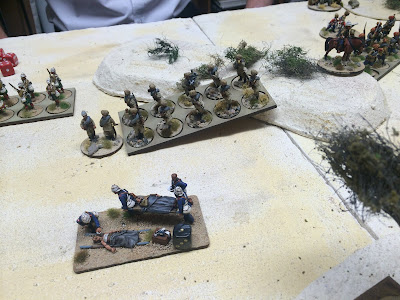 Certainly a see-saw battle - early on the British seemed unstoppable as they mowed-down the natives with their firepower. Later as they became less cohesive they were vulnerable to melee attacks.  The lesson seems simple enough - if the western forces get 2-1 shooting at a Burpha unit they can grind them down pretty quickly and if the Burpha can get 2-1 charging at a British unit they can likely get one in. 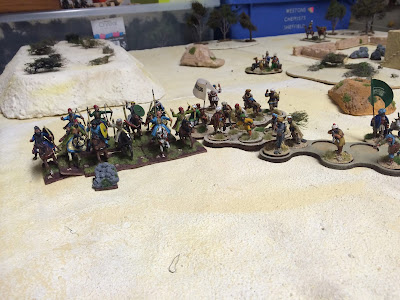 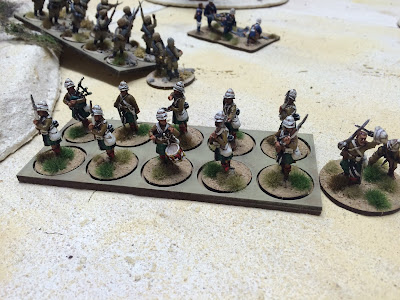