A Tale of Two Forts - the game of two halves

This good Friday so the second outing for my Lizardmen / Salamanders in the Kings of War campaign against The Herd. Th scenario was Dominate (most unit strength within 12" of the centre) and having won the preceding Vanguard skirmish I could deploy 2 units a move forwards before the game.

Given the scenario I opted to place my key strike force in the centre (Ancients on Rinosaurs), flanked by the heavy infantry and preceded by plenty of skirmishers to soak-up the enemy charges. This meant the flanks would need to hold-on long enough for me to break through and turn outwards.

The Herd adopted somewhat the opposite plan with stronger flanks and weaker centre hoping to turn inwards on me.


I advanced smartly and largely got the better of the skirmishing with my troops pushing back The Herd and setting-up most of the charges I was looking for the centre. 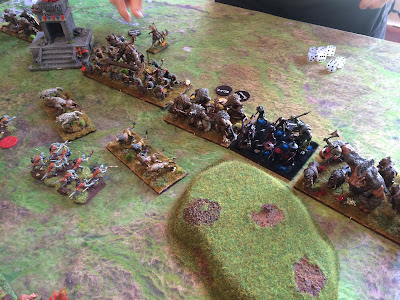 I was also able to bog-down the nasty Stampede, but only for a turn rather than the two I hoped for.


The main challenge was on my left where the flying units found themselves out matched by several tougher flying units. Use of Critters Call denied a rounds shooting from the Skyaiders by disordering them. 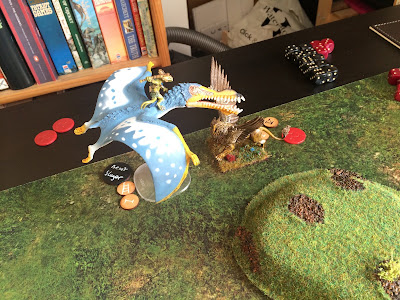 About 3 moves in I got most of my central charges in but things began to unravel a little with a run of very bad dice. Rather than cutting through his Tribal Walker horde holding the centre in a couple of turns, a double 1 meant they held on for 3 against my Ancients. The same unit then had a nice charge set-up that would take it through 2 heroes and into the flank of his heavy infantry - this was again denied by a double 1 on the second hero.


The Ancients ended turn 6 fighting back-to-back Glosters-style. I occupied the centre but not in enough strength to win the game. Some mistakes were made but the two double 1's really cost me the chance to possibly win it. I also need to review the deployments as I had one very weak flank that could nt really hold long enough.