This week we return to the Crusader forces taking the mountain route as they stand on the threshold of Jerusalem, needing only to capture Damascus to clear the way. The scenario for this battle was  Loot & Pillage -  where both sides try to destroy as much of the enemy as possible whilst holding one of 7 objectives each worth 200 points.

The objectives were spread pretty evenly across the table so both sides deployed in a wide formation. The Saracens deployed with strong cavalry flanks and a weak infantry centre backed by the Mamluks.

The Crusaders deployed with the Byzantines on their left, looking to hook around the flank. The right flank was a single unit of knights with some light cavalry support and the bulk of the force occupied the centre.

The battle began with a general advance from the Saracens as they sought to gain early control of the objectives and place the Crusaders under pressure. The Christian forces held back on the flanks to allow time for shooting and advanced cautiously in the centre.  The action was fairly even with both sides scoring hits but no major movement. 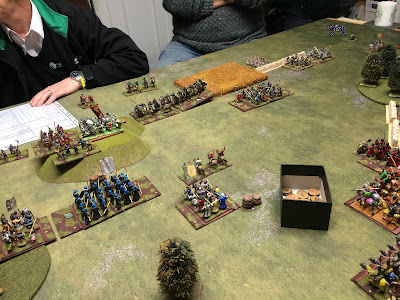 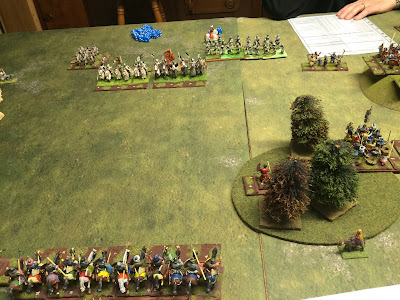 On the Crusaders right the Byzantines advanced against the weaker Saracen light cavalry but disappointingly they bounced-off and settled into a grinding melee.


Back on the right the Brother Knights found themselves largely surrounded and facing off against 3 units of Saracens. Despite a series of flank charges by the Saracens the resilient knights managed to see-off 2 units of light horse and 2 units of medium cavalry. 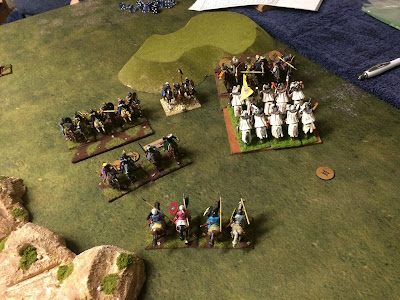 Eventually the Crusaders were able to beak through on the left as the Byzantines finally broke the resistance there and routed the bulk of the Arabs missile troops. 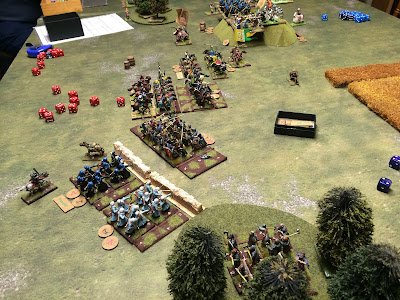 Two turns in the battle looked to be going badly wrong for the Crusaders with defeat seeming likely. They managed to turn it around in the last 2 turns due to the resilience and high armour of their heavy units. So an unlikely win with the Crusaders putting together 2000 points to 1000 points.
Posted by Wargamer Stu at 09:58