I've had my Vanguard Forces of the Abyss painted for a couple of months but not yet played them as I've been using Basileans as part of the Tale of Two Forts campaign - see my next post. This weekend though I played my first game so wanted to give some overall impressions and report on the first game.

Special Rules: Abyssal have Fury, which means for 1 Power Dice you can add 2D8 to a melee retaliation or make a retaliation if already activated and fatigued. This proved to be a powerful ability as if you survive the charge you can hit back hard, especially if you have a decent number of melee dice. So being charged is not something to fear.

Troop Types: Lower Abyssals and Flame Bearers provide cheap melee/shooty grunts and enable unlocks without tying-up many points. Guards and Succubi provide solid warrior choices with the later giving a useful -1 to hit within 3" from Seduction. You also get good (but costly) mounted units through the Hellequin cavalry. The fun comes through the various heroes and monsters with the Tormentor (the inspiring command), Blood-Masque (mounted command), Despoiler (tough melee monster) and Seductress (nasty melee command). The disappointment is the Warlock - its a gorgeous model but you can nt have him and the despoiler as both are large. He's unusual though as a its a 4 wound caster. There are also fast support options in the Gargoyles and Hellhounds meaning you could do an all mounted army.

And so to the game, with impressions at the end....

The scenario selected was The Bard which involves both sides trying to kill the pesky wandering minstrel and escaping with his lute as proof. For this game I fielded; 3 * Lower Abyssal, 3 * Flame Bearers, 2 * Succubi, 1 * Gargoyle, 1* Hellequin, 1 * Bloodmasque, 1 * Despoiler, and 1 * Seductress. So a good mobile force but no spellcasting options.

We each deployed half our force in the corners, with the remainder arriving in turn 2. The Bard starts in one corner and frolics randomly down the table.
We both pressed forward with our forces seeking to intercept the minstrel and stop his damn singing.


In turn 2 we faced-off across the road with the Bard between us. 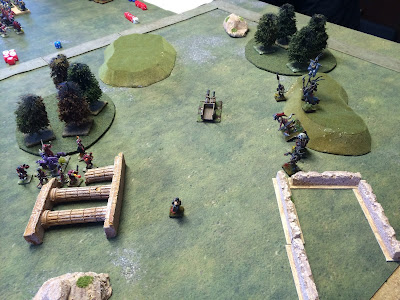 The faster Herd took the initiative and launched a double attack against my Despoiler with the Chieftain and the Lycan. A couple of wounds ensued but the retaliation was  devastating - throwing 6D8 (2 for Fury)  and with CS(3) the Despoiler stomped on both the attackers and dispatched them to the abyss.

In turn 2 the reinforcements arrived and my plan was to use a fast-moving force to intervene and also hit the Bard.

Centrally we each pushed units into the fight with superior numbers and Fury helping the Abyss grind-out a dominance there. 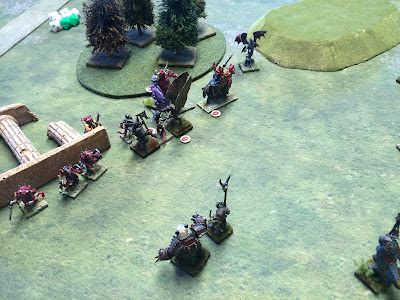 As the Bard made his progress along the road I threw further units into the fray and tried to take-out the Longhorn centaurs. I had the edge but Inspiring / good nerve rolls stopped me killing them as quick as I wanted. 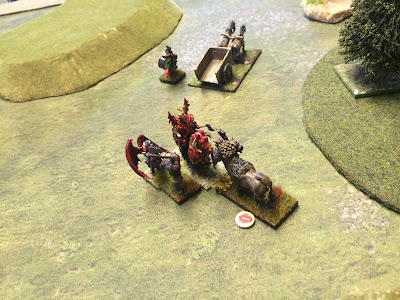 As we hit the final turn the Abyss seemed well ahead - the Bard was heavily wounded and I had two units poised.  The decisive intervention though was the Herd Shaman(s) using Kyron's Curse on my Blood Masque to root him in place and so stop him joining the Seductress in attacking the Bard. This stopped a likely Abyss win and left the game drawn as the annoying crooner made his escape.

So a good tense game but one where The Herd was always playing catch-up after the loss of two major models so early. The Shaman proved effective as expected, but we did nt see that much of the others.


The Fury special rule really creates a dilemma for your opponents - do I risk being charged by that nasty unit in range or attack them and risk a souped-up retaliation against me. I suspect people may want to shoot you instead, but there are a decent number of AR 4 or Stealthy units in the army. The melee potential is good with several 4D8 or 5D8 options, nice heavy cavalry and plenty of Crushing Strength to help unlock the armoured enemies. The Succubi are fun too with the -1 to hit in 3". The one weakness is you will likely have a reasonable amount of Grunts for unlocks (I had 6) so need to watch out for breakpoint losses.

The Abyss benefits from being an "official" Mantic army so gets plenty of options in the army lists. This means you can build a variety of forces - melee, fast, or shooty. Based on this game it looks to have decent points vs value balance too. So should be a fun one to play.

Email ThisBlogThis!Share to TwitterShare to FacebookShare to Pinterest
Labels: Forces of the Abyss, Kings of War, Vanguard