A tale of two forts - the opening battle

This weekend I was in Fishponds for the first pitched-battle of our latest KOW campaign that pits Salamanders against The Herd. The previous Vanguard battle was won by The Herd side, giving them upto a 300 point infantry unit in the battle. The scenario was PUSH in which you have to control loot 3 tokens and gain additional points if you get them across the half way line. There is a tie-breaker token in the centre.

This was a big game at 3000 points a side. I went for a tough core of Ancients, Tyrants, Ancients on Rhinosaurs and Skyraiders. This supplemented with Lekelidons, archers, heroes, and mage priests plus the Inspiration of the Ancients formation for additional inspiring. Finally I had a unit of Basilean paladins as a campaign requirement.

My deployment was a simple as a planned to counter-punch the fast Herd. My centre was Ancients / Tyrants with a unit of fearsome Ancients on Rhinosaurs on each flank. My refused left also had Skyraiders for shooting and a Skylord to tackle his monsters. Chaff was sprinkled in front along with Lekelidon and Artakl was ready to snip at heroes.  The Basilieans took the token

The Herd spread their forces over a wider arc - the centre being composed of Guardian Brute heavy infantry and a Spirit Walker Horde. The left was fast-moving Eagles and Tribal Chariots whilst the right was Lycans and monsters. A Guardian Brute large infantry carried the tokens.

As planned I adopted a defensive posture in the first couple of turns hoping to disrupt The Herd with some well placed shooting . The results were disappointing with the dice a bit poor and the wounds easily healed by the three Shaman that had been deployed. The Herd advance was much more cautious than I had expected but they did edge closer to the half way line and throw out some chaff.

In turns 3 and 4 I focused my fire more taking out a couple of the lighter armed units and disrupting one of the Shaman with Artakl's shooting. I would like to have attacked on my right but only having one unit on AoRs was unable too without being double charged / flanked by the Eagles and Chariots. 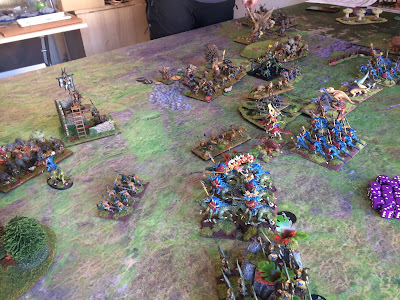 The Herd token bearer was able to sneak over the halfway line and grab the central token in the 3rd turn. I made his life uncomfortable with some Lekelidon / Mage shooting. This was enough to send him scurrying back into his own half.  When the long-expected Herd charge came in I was able to withstand it and counter charge thanks to the many Fearless / Furious units in the army. 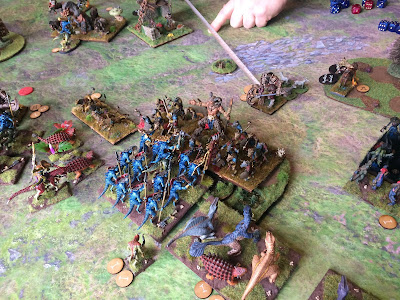 In the end a narrow 4-3 loss as it was clear I could not catch The Herd token bearer.  Some things to ponder.