For our game this week we returned to the coastal Crusader force and its second attempt to capture Tripoli. This weeks scenario was an easy one, Invade - the winner is the one with the most points in the enemies half of the table.

The Saracens deployed with a large force of shooting cavalry on the left, looking to flank the Crusaders.  The centre was held by the bulk of the infantry, backed by the elite Mamluks. The right had a force of spearmen with some light cavalry support, aiming to blunt the expected knight attack.

The Crusaders did nt mass their knights as had been expected but instead deployed them on their left (opposite the Arab spears and more centrally as a reserve. The Byzantines held the right opposite the shooting heavy Saracen cavalry.

On the Saracen right both sides engaged in a skirmish with their light horse. Just out of shot if a unit of horse archers whose superior shooting meant the Saracens won this initial round. This tempted the knights into range who quickly found themselves bogged-down in a grind with the Saracen spearmen. Over the game they found themselves gradually driven back and broken down. 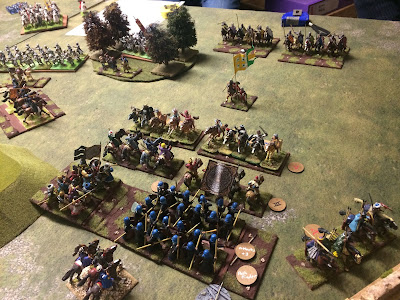 On the Saracen left they advanced rapidly into range and began to bombard the Byzantines with archery fire. In an unusual moment the Saracens declined a flank charge with their light horse that was within the rules but the commander felt was a bit gamey - would this cost them the game? 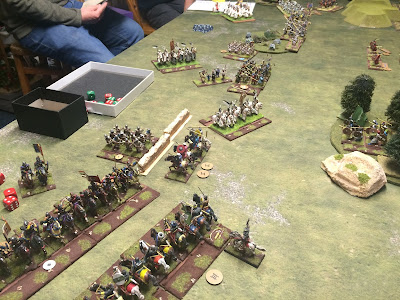 The Byzantines charged their Saracen opponents and with help from a unit of knights  released from the reserve were able to rout them, leaving just two units of horse archers to hold the Arab left flank. Not looking good for the Saracens!


Centrally the Saracens opted to launch an attack with their spearmen and support from some cavalry and Mamluks. This went well and broke through the lines to threaten the Brother Knights in reserve. the Brothers eventually charged the Mamluks scoring 14 hits with 18 attacks

Back on the Saracen right they finally dispatched the final unit of knights and swung their spearmen into action against the Crusaders centre. 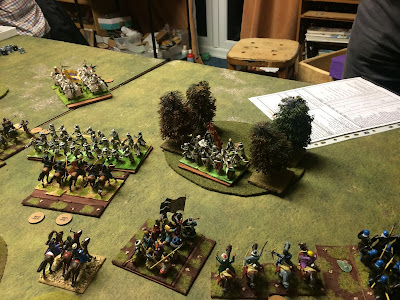 Finally on the Saracen left the horse archers were able to withstand a combined assault from the Byzantines and Knights against their hill-top refuge. A timely intervention from the second unit of Mamluks helped stem the tide. 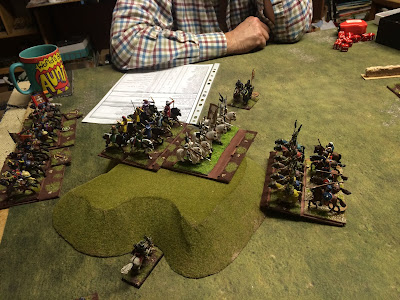 In the end the Saracens won by a decent margin of about 800 points. They had lost more troops than the Crusaders but had pinned them in their own half so limiting their scoring units.