The other game fought this weekend was the Vanguard part of the second round of the Tale of Two Forts campaign. The scenario is Capture the Plans where a spies body is place in the centre of the table - on  6-8 (D8) it contains the plans bit on 1-5 they will be near one of the two temples shown on the overview picture. So do you gamble on a specific site, cover them all, or go central and try to react.

I tried to cover all three locations in the hopes of securing the plans early as moving was harder for me since I lacked the flying troops present in the Nightstalkers army. One objective was covered by Sisterhood Scouts who could deploy before the battle, the second would be challenged by the fast-moving Panthers, and my main force would occupy the centre.


I swiftly moved the Panthers to challenge for the northern site and reinforced the southern with a Paladin and Sargent. Centrally I search the spy with a man-at-arms and found that the plans were located at the southern site - so the race was on. 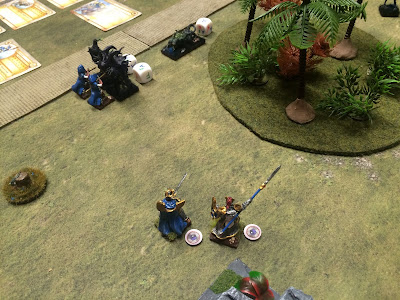 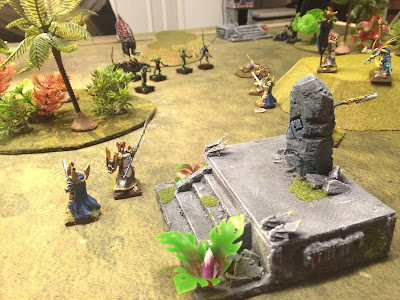 As both sides sought to drift towards the plans my Scouts came under attack from 4 Nightstalkers. I threw some reinforcements into the fray and judicious use of Basilan Iron Resolve (which enables a high armour save of 3+) allowed them  unexpectedly bog-down the Nightstalkers for the whole game.

I captured the plans on Paladin hoping that his high nerve and armour would enable him to hold them. 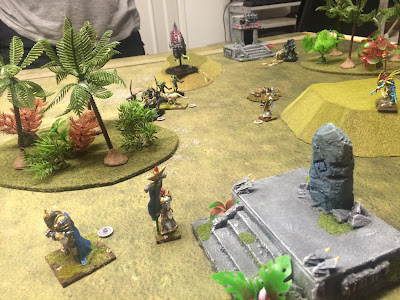 With the plans secured two distinct strategies emerged. I sought to turtle and prevent any attacks (including flying ones) against the Paladin. The Nightstalkers wanted kills to boost their experience points and maybe break my force before the 5 (or maybe 6 turns) elapsed. 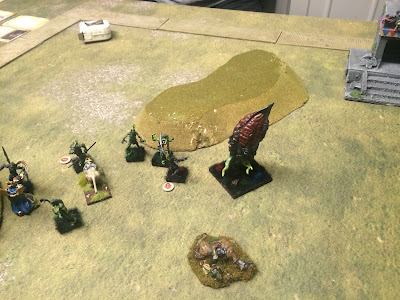 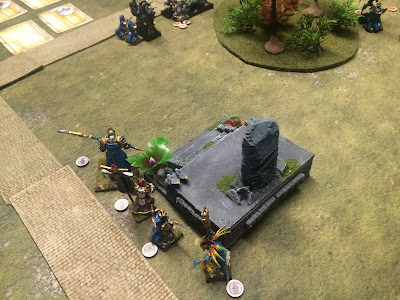 The game ended after 5 turns with no real threat possed to plans, although a 6th turn might have been interesting. So a win for the Basileans albeit and odd on as they wounded many Nightstalkers but were unable to kill any. Losses amongst the Basilean non-grunts proved to not be permeant and I even won some gold betting on the torments. XP was very limited though placing me at a big disadvantage in the next Vanguard battle.

Heroes of the hour were the Sisterhood Scouts - they never fired a shot but did hold-up some decent Nightstalkers for the whole game. The Basileans are an interstsomg mox 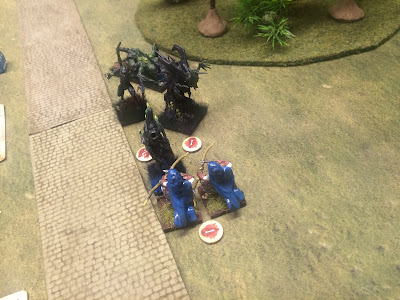