For our game this week we return to the coastal Crusader army who had Tripoli firmly within their sights. The scenario selected was Loot - three loot counters were placed along the centre line with the winner being the one who controlled the most at the end of 6 turns. Units move is limited to 5" when carrying a loot counter.

The Saracens quickly spotted a flaw in the Crusader deployment - the eastern loot marker was only guarded by a unit of crossbowmen, who would need to move or be hindered in their shooting. So there was an all-out attack which overran the loot, allowing a unit of light horse to capture it in turn 1.

Away on the Crusaders right the Byzantines advanced against the weaker Saracen infantry force with the aim of pushing them back and taking the loot counter. 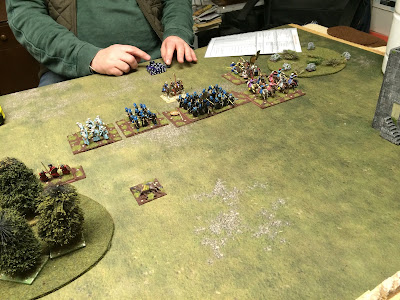 In the centre large amounts of heavy horse were on the move with both sides pushing forward. The Saracens managed to snatch the central loot counter from the more cautious Crusaders but rapidly found themselves embroiled in a series of chare/counter charge moves which the heavier knights seemed to be getting the better of.


On the Saracens right with the loot token secured for minimal damage they turned their attention to the out numbered knights on that flank. It took 2 turns to finally break them and release some vital cavalry to move across to the centre.

The blow and counter-blow continued in the centre with the Crusaders slowing gaining an edge but being unable to break free and pursue the central loot counter slowing creeping towards the base edge in the hands of some heavy spearmen.


On the Crusaders right the Byzantines were tearing chunks from the Saracen infantry but somehow a unit of skirmishers had managed to snatch the final loot counter from under the Crusaders noses and make off with it.


As we entered turn 6 the Saracens had managed to get one loot counter safely off the table and had possession of the other two, but both were under potential threat. The western counter was carried by a unit of skirmishers who were attacked by the Byzantine psiloi, who bounced-off leaving the Saracens 2-0 ahead. The central counter was under threat from several units of knights but some timely flank / rear charges has denied them the chance to intervene.  A timely 1-1 for Nerve also allowed a unit of Saracen cavalry to last an additional turn.


So a 3-0 win for the Saracens but it looked like it might have easily been 2-1 to crusaders up until turn 6, so a nice tense game.
Posted by Wargamer Stu at 12:59