This week the diary-gods conspired to have players from only one side available for the game, so we opted for a non-campaign battle in which I took the role of the Saracens. The scenario was Eliminate in which you must destroy as much of the enemy as possible. We went for 2500 points with cavalry heavy armies.

Both sides settled on a similar plan of massing their main attacking force on their left whilst looking to hold their right with a defence centred around a spearman horde.


The Saracens began the battle by advancing on the left with a large number of bow-armed units, whilst refusing the right flank opposite the bulk of the Crusader knights. Early rounds of shooting were rather in favour of the Saracens, prompting the Crusader right to advance rather than seeking to hold the flank. 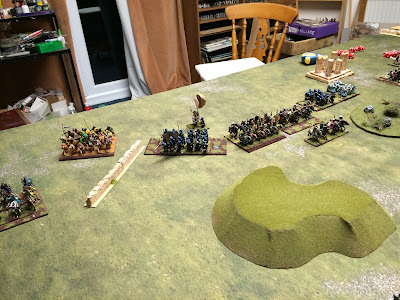 As the Crusaders main attack on the left moved into range the Saracens were faced with the classic KOW dilemma of whether to take a charge that may leave you flanked or sit back in the hopes of a strong counter. Being out numbered on the right I opted for a sacrificial Mamluk charge to buy time for my main attack to strike home.


This was somewhat successful in that the Crusaders right crumbled allowing my cavalry to roam freely in their rear mopping up a few units. On my own right losses mounted though and as we entered the last turn I was slightly behind on points.

The last turn was a classic case of remembering the scenario. Despite being ahead the Crusaders attacked the Saracen spear horde ensconced on hill and bounced-off. The follow-up counter charge resulted in a units of knights being killed and the Saracens winning by a narrow margin.

A tense game and one where oddly doing nothing would have served the Crusaders best in the last turn. 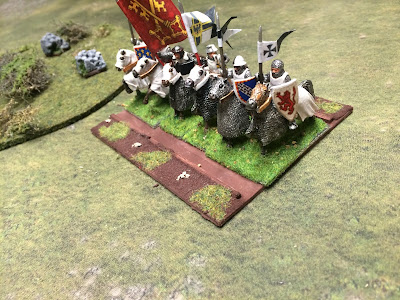