The Crusaders taking the mountain route moved onto their second target at the fortress of Aleppo. This weeks scenario was Push in which both sides have three tokens, with the winner being the one who gets the most tokens over the half-way line after 6 turns.

The Saracens deployed all their shooting cavalry on the right, most of the infantry in the centre, and much of the heavy cavalry on the left along with the spearman horde. The mamluks and infantry horde each carried one of the tokens.


The Crusaders deployed the Byzantines and two units of knights on the right, the infantry in the centre, and a mixed light / heavy cavalry on the left. The tokens were all placed on a unit of foot knights deployed behind the Byzantines.  The plan was to hold on the left and attack on the right to push the knights over the line in the later turns.


The Saracens pushed forward on their right with their large force of mounted archers. Under this firestorm the light cavalry quickly melted away leaving the knights alone. 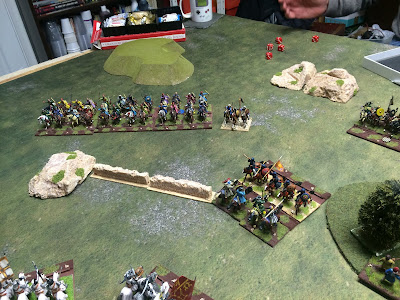 On the Crusaders right the Byzantines quickly got stuck into the Saracens medium cavalry and quickly found themselves bogged-down in a protracted and fairly even fight that would rage for the bulk of the battle. 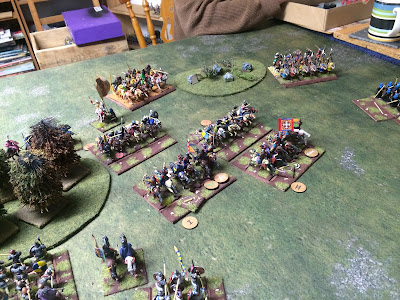 The Saracens spearman horde also advanced towards the enemy and immediately attacked a tempting unit of light cavalry that stood in their way. This opened-up a charge lane into which a unit of Knights and a unit of Brother Knights leapt.  Despite the loss of thundering charge against the spearmen the knights combined charge began to wear-down the spearmen. 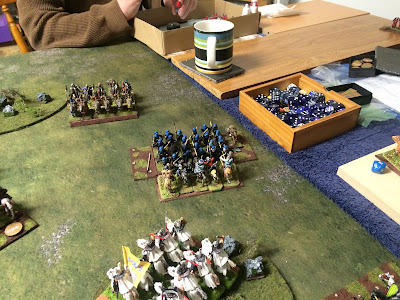 Over on the Crusaders left they came under heavy fire from the mounted archers but their superior armour meant they were able to withstand the attack. 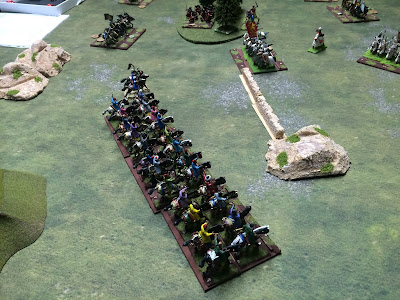 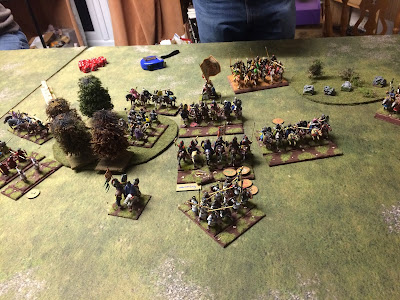 Tiring of the pesky pelting the knights on the left launched an assault which pushed-aside a couple of units of Saracens and generally stabilised the flank.


Back on the Crusaders right the spearman horde has been vanquished, along with its precious token. This meant the way was now open to attack the flanks of the mamluks who also carried a token.


By the end of turn 4 the Crusader line was stable and the foot knights carrying the tokens heading for the centre. One Saracen token had been captured and a second was in severe danger.  So victory was declared for the Crusaders. 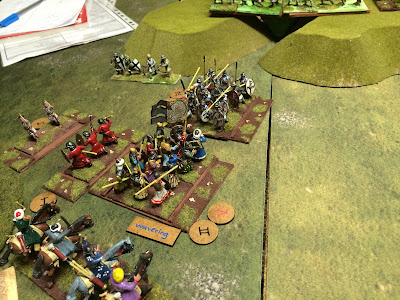