The British established a solid base-of-fire in the centre with their now customary mix of mortars and HMGs. The main attack was to be against the Germans left, with a strong probe towards the right.

The attack on the right developed quickly with troops fanning out through the woods and sheltering in the gully that bisected the table. This stimulated the Germans to place most of the elite Fallschirmjager against the main British attack, with a single section in the olive oil factory. The mountain troops deployed into the town.

The main attack on the right began to slow as accurate fire from the Paratroopers pinned the advancing British and the Germans repositioned all their AT resources to counter the supporting Matilda. 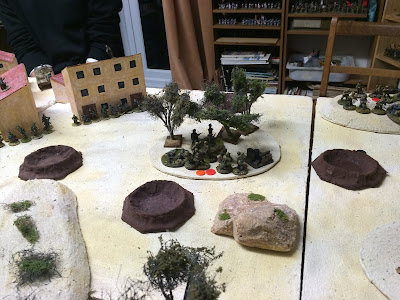 Its hard to be strong everywhere though, and this redeployment left the German right weakened, thus allowing the British infantry deployed there to push forward and eventually capture an all important objective.


It was clear that the British had to upper hand so the Germans were forced to withdraw from the DZ. This victory means the campaign is finely balanced at 3 wins a side.
Posted by Wargamer Stu at 10:04