The next campaign we're planning is a refight of the 1st Crusades, so this week we held a small practice game to teach people the rules we'll be using. I've selected Kings of War Historic as it allows you to fight a large game in a few hours.

Both sides had a balanced force - the Crusaders were stronger in heavy cavalry but the Saracens had more horse archers. The scenario was Invasion, meaning the winner was the one with the most units in the enemy half at the end of 6 turns. Some artists license was allowed with the inclusion of Military Orders on the Crusader's side.

Both deployed with infantry in the centre and the better cavalry on the Saracens left flank.

Both sides refused the flank on the Saracen's right but attacked in the centre and the Saracen's left. The Crusaders winning initiative meant they went first and we're tempted into a charge against a small troop of skirmishing horse archers. This manoeuvre allowed the Saracen Mamaluks to make the first charge but they failed to make the expected breakthrough. 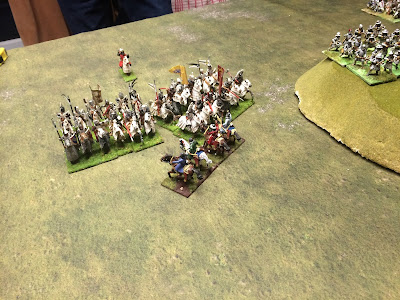 In the centre the Saracens charged headlong up the hill and smashed a unit of crossbowmen, The supporting Spearmen Horde though suffered the ignominy of bouncing-off a Troop of Levy! 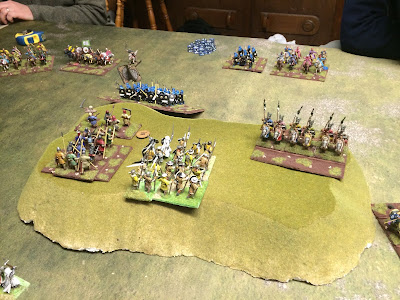 On the Saracen left the Crusaders launched their counter-charge which crunched the Saracen medium cavalry but they then threw the dreaded double 1 for the Nerve test, thus leaving the crippled Arabs  to withstand the attack and eventually push the Knights back into a rout. 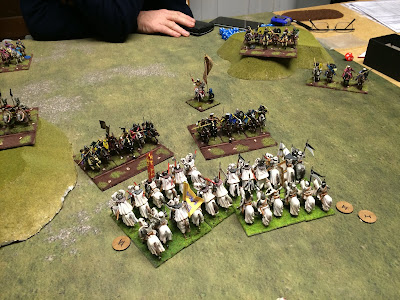 Sensing they were losing against the Saracens left the Crusaders now began to attack on their right flank. It was a desperate measure though as they were put numbered and out shot on that side, leading to the attack quickly bogging down. 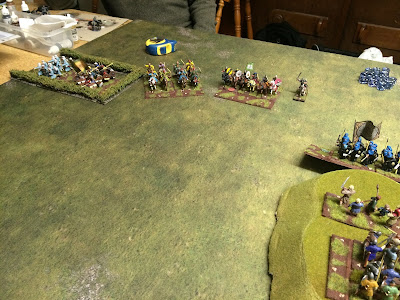 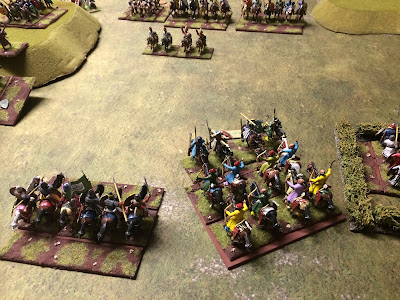 In the centre / Saracen left the Arabs managed to achieve flanking positions on several units and with double damage these were quickly cleared. Things looked grim for the Crusaders. 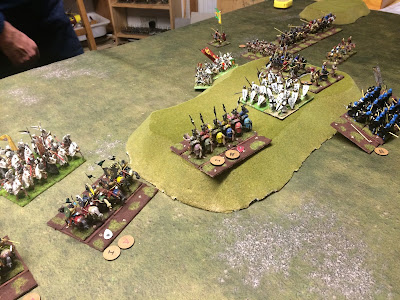 With the Crusaders centre and right crumbling we declared a win for the Saracens.

As I had hoped we were able to play the game to conclusion in about 2.5 hours including deployment. Very good for rules most had not played before.

The turning point was the Crusaders failure to break an badly damaged Arab unit by rolling snake-eyes. This would have opened-up the flank but instead they found themselves  routed the next turn.
Posted by Wargamer Stu at 12:35