This week I got to try out two new items - my new Deepcut battle mats (very nice) and my freshly painted Basilean warband (also nice). The scenario selected was the supply train. The defending Basileans gathered VPs by destroying the Nightstalkers, who it turn needed to destroy the pack mules.

The Nightstalkers went with 3*Scarecrow (Grunt), 1*Needlefang swarm (Grunt), 2*Horror (Warrior), 2*Shadow hound (support), 1*Reaper souldrinker (Command), 1*Mindscreech (Caster) and 1*Butcher fleshripper. So lots of additional power dice from the commands but about half the points invested in them.


I deployed with my most defensive troops guarding the mules and central reserve of the hard-hitting Ogre / Sisters. My plan was to let them come on and then hit them hard with the reserve. 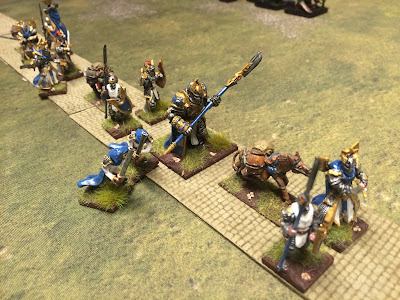 Plans change though and in turn 1 I spotted that with the northern Nightstalkers moving slowly I might be able to pin them away from the mules and so reduce my risk of a loss. So I pushed a Paladin and Man-at-arms forward hoping to tar-pit the key units of the enemy.


This actually worked rather better than I had hoped with the dynamic duo hanging on for most of the game due to judicious use of the  Iron Resolve special ability  to boost their armour saves.


In the south the Nightstalkers moved rapidly to attack me so I was forced to deploy about half my force to block them, risking an overrun in the north. I held them but felt exposed if I could not break the main force in the north. 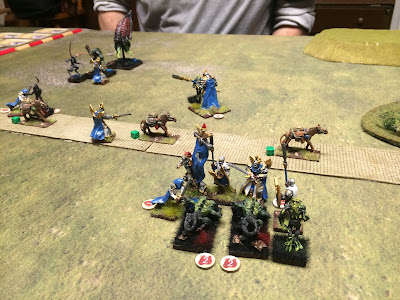 Seeing this as a job for the Ogre I mobilised it, but quickly found myself discombobulated by the Mindscreech which has the ability to make a single model miss a whole turn. Both the ogre and Chaplin in turn found themselves locked-down and unable to act.


Eventually I dispatched the force of shadow hounds in the south and was able to bring my full force to bear on the enemy in the north, with a win declared for the Basileans after about 2 hours play.


The Basileans ability to survive was once again shown in this battle. With decent power dice the key troops are very tough to kill so they can wear you down in the end. The Sisters are also interesting to use - cheap, high damage but poor defence, so a classic glass cannon! 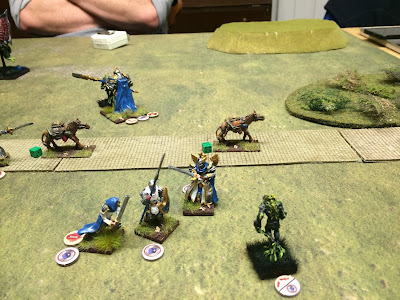 Email ThisBlogThis!Share to TwitterShare to FacebookShare to Pinterest
Labels: Kings of War, Vanguard