This weekend I tested my new KOW Vanguard Basilean force. The figures are not yet complete so some mythic Greeks stood in. Below is a quick AAR from our first battle and some tactical reflections.


For this first game I chose a mixed force to test-out several options and see what worked. My opponents were the dastardly Nightstalkers:
3 * Crossbowmen (Grunts)
1 * Sargent (Warrior)
2 * Paladin Defenders (Warrior)
1 * Ogre Palace Guard (Monster)
1 * War Wizard (Caster)
1 * Panther (Support)
1 * Veteran Sargent (Command)
The Faction special rule (Iron Resolve) allows you to roll the saves for a model at armour 3+ for the cost of 2 power and may be used any number of times a turn.

I opted for two "pods" - the Crossbows and a Sargent would hold the flank, with support from the Panther. The Ogre, Defenders, Vet Sargent and Wizard would push up to hold the objective. In this case its a Portal and contact gives you victory points each turn. 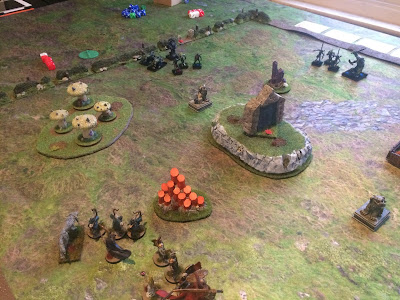 The Nightstalkers plan seemed similar, with their faster troops threatening my flank and melee troops pushing towards the objective. 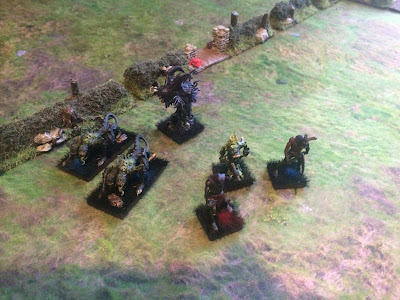 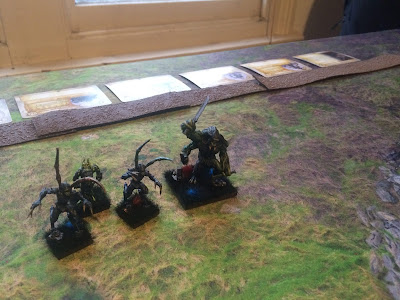 Round 1 was a bad one for me with the Crossbows being charged and annihilated by the fast-moving Shadowhounds and a Shade. This  forced me to commit my Panther, Sargent, and Ogre to shore-up the flank.


I pushed my Paladins and Vet Sargent onto the objective with the hope of hanging-on long enough to grab some victory points. Although outnumbered they proved surprisingly resilient and were able to hold the Portal for the remainder of the game.


So the Basileans racked-up a 10-0 win without ever feeling like I was actually winning at any point!

Crossbowmen:  These were a disappointment dying without causing any causalities or firing a shot.  With a 12" range and unable to move and shoot (Reload) they will always be vulnerable to fast opponents and seem likely to be mashed regularly unless very carefully positioned.

Sargent, Paladins, and Vet Sargent: These guys performed well and would form the core of future armies. They are loaded with survivability tools; decent armour (4+ or 5+), Parry (reroll a hit), and Defender (Brace as a short action). Backed with a little healing they are hard to shift and Parry is very useful as you can cancel an Exploding 8's attack.

Ogre: He did ok and certainly hits hard for a 30 point model. He became bogged-down fighting the Shade (which has a nerve of 3+) but would munch-through lesser foes.

Panther: This was not used at its best but has good melee (4+ to hit) and with 3 wounds can hang about a bit if needed.

Iron Resolve: At 2 power this allows a model to roll all their saves at 3+ for that turn. This is A-MAZ-ING and saved me on several occasions, especially against high Crushing Strength. I found that Parry + Iron Resolve = banging your head on a wall for their opponents.
Posted by Wargamer Stu at 10:07