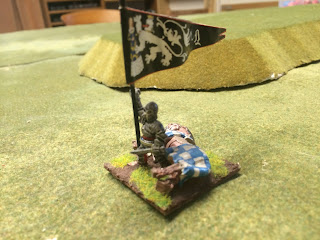 Rather than risk the Bank Holiday traffic we assembled on a lovely day for some War of the Roses action. We've previously used Bloody Barons (Peter Pig) but on this occasion opted to test out some modifications for Dux Bellorum Luddite1811's blog.
http://luddite1811.blogspot.co.uk/2013/03/dux-bellorum-wars-of-roses-unofficial.html

We opted to fight a short introductory battle as a reminder of the rules and then a larger encounter as the main event. The only change we made from  Dux Bellorum was to assign 5 leadership points to each general rather than 6 as the armies would likely contain less units than the Dark Ages version had assumed.


Our first game was a small 32 point / side affair with the Yorkist's commanded by Mike and the Lancastrians by Nigel. York was immediately on the attack with their light horse pushing towards the  flanks while the archers opened-up on the Lancastrians pike men.

As the pikemen approached the Yorkist line they used the Passage of Foot special rule to bring forward the billmen and household troops to engage the Lancastrians heavy infantry.

The Lancastrians managed to achieve a flanking position but were in turn flanked themselves. Meanwhile the Lancastrian foot were steady pushed back resulting in the death of their general and the army reaching the 50% point. now lacking any leadership points it was a hopeless position.


So the game ended with a clear Yorkist victory. There being no obvious defects we deployed for the main game. 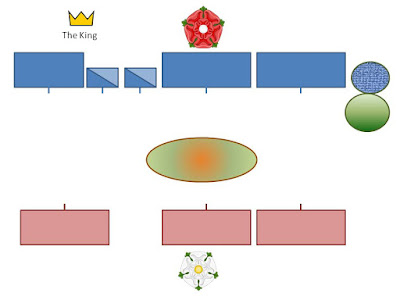 For the main battle we played a simple scenario where the Yorkist's tried to capture the Lancastrians King. All players received 32 points to spend on troops.We allowed 3 shots per missile unit to encourage combat.


Given a free choice of forces the players made rather different choices with their points. The Lancastrians went heavy on the pikes and fielded four units supported by some pointed. The balance was made-up with levy and retinue troops.

The Yorkist's opted for a higher proportion of missile troops with no cavalry and only one pike unit. They did however throw-in a few crossbow units.


The battle began with the Lancastrians pushing forward on their flanks while both the retinues  in the centre advanced towards the hill.

In traditional fashion we then indulged in a long-range archery duel which had limited impact. the ability to use leadership points to mitigate hits meant it was hard to achieve a decisive edge. Ominously the Lancastrian left chose to hold fire and close the range seeking a better target.


Whilst on the Yorkist left the archers and crossbowmen found themselves up against the heavier Lancastrian units having done only limited shooting damage.


After a couple more turns the Yorkist right had completely collapsed forcing the retinue archers from the centre to move across.  Using their greater manoeuvrability the archers were able to catch the pike men in the flank but did only limited damage.

In the centre the Yorkist's continued to push forward and picked off several units of archers. however on their left their comrades succumbed to the heavier Lancastrian troops.


So with the two flanks shattered and the Lancastrian King in no danger the game was called a Lancastrian win.


A fun game and we managed to conclude the main battle within about 2 hours. There was a great deal of debate about the merits of different rules for handling the pikes but in the end we concluded it may be best not to obsess over them and simply limit the numbers more strictly.

Crossbows require more attention though. Their limited aggression and no passage of troops ability made them easy-meat and unable to shoot-down the approaching knights. On balance we felt they might work better with the same stats but designated as Skirmishers. 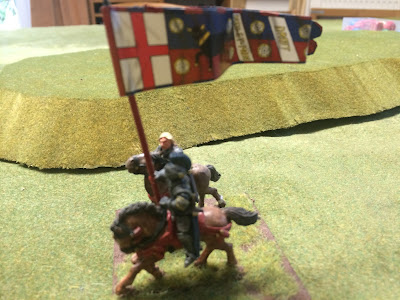 Email ThisBlogThis!Share to TwitterShare to FacebookShare to Pinterest
Labels: Medieval