This weekend I travelled down to Fishponds for my second game of Kings of War. Once again I was fielding Ratmen, this time reinforced by some Lizardmen. Most of the figures are original Warhammer from back in the early 1980's. As last time I was facing The Kin (Dark Elves).

This scenario involved both players attacking with the person getting the largest numbers of units over the halfway line at the end of the game the winner. Hordes are worth 3 points, Regiments 2 points and Troops 1 point.


My plan was a simple one. I would refuse on my left where all the missile troops were deployed and hope to sneak them over the halfway line later. I would attack on my right with my heavy-hitting beasts and finally grind forward in the centre with my large hordes in the hopes of securing victory.


The Kin choose a very similar plan but reverse; a refused right, an attacking left and a steady advance in the centre.


After an initial advance both sides began to come in range. One of the quirks of KoW is that when charged you don't fight back immediately but must wait until the following round, assuming you are not broken by the initial charge. As The Kin on the flank were all  faster  this would mean my troops were bound to be charged first and would have to withstand an assault before they could fight back.

In the initial Kin attack the Brutes were able to hold-off and then destroy the archers, but the Ratman ogre was destroyed by the Kin's cavalry, who then rallied back.

In the centre my Hordes pushed forwards looking for some targets and seeking to support the units on the left. The downside though was I would have to come within charge reach of the enemy and so inevitably be charged first.
Fortunes were mixed in the centre. The Lizardman phalanx made decent progress through the woods thanks to their Pathfinder ability and attacked 2 units to their front. The leading regiments of shock troops were charged and annihilated (ouch) with the Kin spearmen then engaging my Ratman horde.

Over on the Ratmen's left they found themselves facing waves of Kin shock troops, who with their greater move could manoeuvre into position and launch a series of attacks against the  Brutes / supporting Horde. Although they hung-on gamely they caused little damage and were broken after a round of combat.  ﻿


In the centre the Ratmen and Lizardmen suffered a bad round - despite each of their Hordes having 25 attacks they were only able to score a single hit each. With that the game was done and The Kin won again. 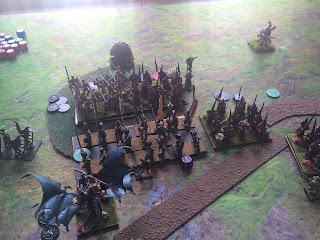 In KoW the battles are supposed to last 6 turns and then the victor is adjudicated. We lost count so stopped after about 2 hours play. So its possible we played rather more than 6 turns.

In this scenario The Kins additional movement with their better units was certainly an advantage, enabling them to launch the initial assaults without answer from the Ratmen. The army was also better balanced perhaps as it was designed rather than being made-up on whatever figures were available. The lesson: Regiments of hard-hitting troops with good mobility seem to be the order of the day in KoW with some cheaper dross in-front to soak the initial attacks.