Battle of Herdonia - an Armati battle for the Punic Wars

The Battle of Herdonia took place in 212 BC when Hannibal was able to lure the impetuous Roman commander Gnaeus Fulvius Flaccus into battle on terms advantageous to him. Hannibal drew-up in a conventional battle line but was able to place light troops on the flanks of the Romans by moving them through some rough ground. 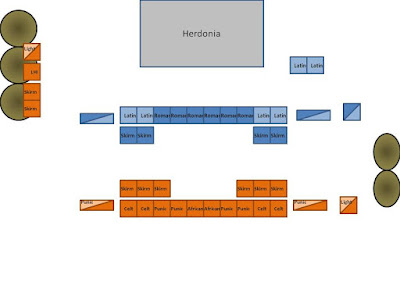 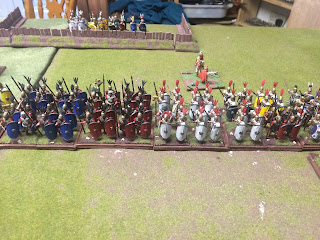 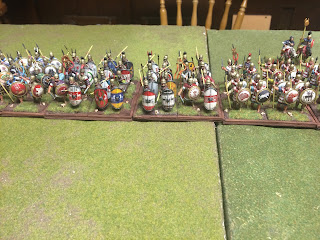 Our deployment followed the scenario map given above. The main adjustment from the core rules was to add an extra light command to enable the effective operation of the flanking force. The towns defences and the Roman camp were both purely for show and played no part in the scenario.

At first sight the Roman position appears to be a very weak one as they are outflanked. Whilst in bad position there are three mitigations though. Firstly the Roman main battle line generally has +1 or +2 FV, the flank attack is all light troops so not as devastating as if heavy, and finally the African
Veterans are in the centre of the line so not really exploiting their manoeuvrability.


Both sides moved forward with their cavalry on the flanks and the Romans proceeded full steam ahead seeking to outdistance the flankers as quickly as possible. Knowing that he as at a disadvantage in the centre Hannibal advanced cautiously, mostly to deny the Romans too much space to out run the flankers.

On the Punic left there was a fairly long-running cavalry melee that eventually resulted in the destruction of the Punic cavalry.


On the Punic right both sets of cavalry quickly came to blows. After a few rounds the Punic's Numidian allies were able to chase-off their opposite numbers and threaten the Latin's flanks. The early death of a Punic general accompanying the cavalry was a blow but somehow they mmanaged to hang until the end of game.


So we come to the centre of the field where the heavy infantry combat took place. The initial charge to contact was a disappointing affair for the Carthaginians with lots of "1's" along the line meaning that the Celts lost their impetus and did little damage. However all was not lost as the flanking units had arrived in the Roman rear and charged-in.
﻿

We now entered the crucial final phase of the game.  On the Roman left some good rolling saw them kill two units of Celts and so open-up a flank. On the Punic left their rear attack and a line break gave them several flanks and rears.


Ultimately the Romans flank attack proved more effective and they won the battle 5-4. we played through the end of the turn and ended 7-6 to Rome. 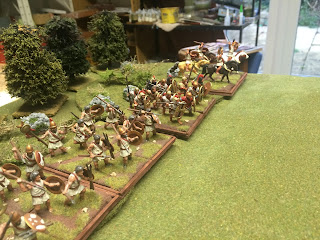 Its hard to pin-point any specific errors made by Hannibal in this battle, but a few thoughts occur:
Still it was nice to fight something a little more varied than the usual up-and-down games.

This now concludes the action  in the Armati Punic Wars campaign for now. We'll be back in future with two more campaign for which we're painting madly; First Crusades and Successor states.