Having a slightly larger group than normal this week we refought the Battle of Ilipa from the Punic Wars. The battle was fought in Sothern Spain in 206BC between the Scipio brothers and Mago Barca, one of Hannibal's younger siblings. Some consider this Scipio's finest victory as he out manoeuvred the Carthaginian's to secure a famous win. In something approaching a reverse of Hannibal's own tactics at Cannae Scipio refused his weakened centre composed of Spanish auxiliaries and attacked the flanks of the Punic lines to envelope them.


To liven up the battle we opted for a semi-historical deployment. Both sides heavy infantry deployed histrionically but the commanders were given free choice over their mounted and skirmisher placement. The Romans opted to concentrate their heavy cavalry on their right with small blocks of skirmishers covering each of the main infantry blocks.


The Carthaginians made a similar choice - they deployed with all their mounted on their left (so facing the Roman horse) with the elephants on the right. The skirmishers deployed to cover the Spanish.

Hostilities opened with both sides advancing their cavalry and skirmishers in an attempt to dominate the enemy and clear the field of their opponents.  In the initial skirmishing the light troops largely cancelled each-other out as is often the way. 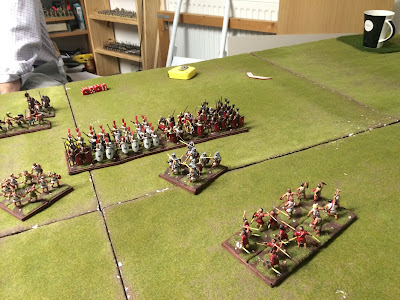 In a bold move the Romans advanced their cavalry rapidly into the Punic half and charged their opposite numbers. Initially the fight  was even but the intervention of the Numidian cavalry in the rear of the Romans began to wear them down.


In accordance with their plan the Roman pressed forward while their Spanish allies held back avoid contact with the heavier African foot. On the Punic right they contacted the elephants who formed part of the advancing African Division and were halted. On the Punic left their cavalry were able to launch an attack against the Triarii but bounced-off causing little damage.


As the battle-lines came to contact we entered the business-end of the encounter with the Carthaginian's narrowly ahead 2-0.  The Romans began chewing through the Carthaginian's Spanish allies and were making decent headway on both flanks as the African infantry came to blows with the Roman's own Spanish auxiliaries.

The Punic and Numidian horse now tried to make their presence felt by assaulting the rear of a Roman unit and the flanks of their Spanish allies. This met with initial success routing a the Romans and killing a general, but critically they failed to break the Spanish. They were however 5-3 up and looking to have the upper hand.

With both sides fully engaged it was a race to destroy the enemy with both sides luckless Spanish troops very much in the firing line. 5-3 quickly became 6-6 as we entered the final turn. The Punic horse stood ready to sweep away an isolated Roman unit but before they could do so over on the opposites flank the Carthaginians lost their final unit making it a 7-6 win to the Romans.


Our recreation largely followed history and ended in a Roman victory although much closer here than the original. As always there are some what if's to resolve.

The Romans were a little hasty in their cavalry attack and that could have been more costly. The Carthaginians were unable to execute a couple of flank attacks as fully as they would have liked. which could have led to that final 7th kill.