Ever﻿ since deciding to put together a fantasy Persian army for my Kings of War struggles, I've been pondering how to construct some flying carpets to provide some essential colour for what is essentially an early middle ages Islamic force. Below is my attempt at this.
The major issue to resolve is how to make the carpets themselves so they are light, strong, but can be sculpted to have some waves in them. In the end I settled on some fairly thick plastic. Total cost was about £2 for unit, although I had some of the components already.

﻿
So for this build I used 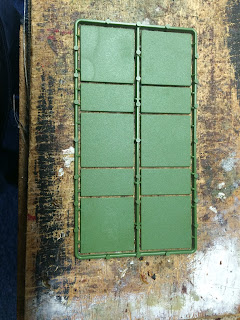 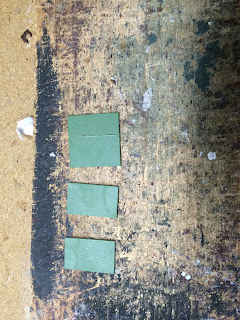 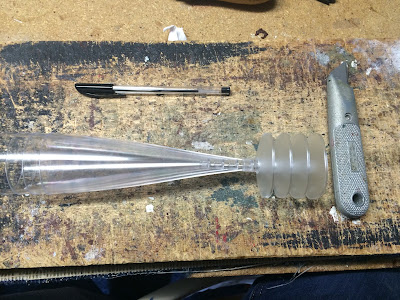 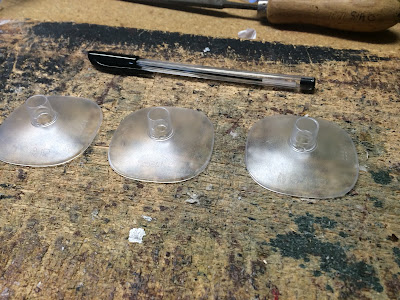 
The flying stands were simplicity themselves - all you need are some lengths cut from the clear plastic pen body and then glued into the wine-glass bases. Lacking a hot-air gun I boiled the plastic bases for about 5 minutes and then bent them at the ends to create a wave effect. As you can see some of the end distorted so a little trimming was needed afterwards.


I chose to drill holes right through the carpets and then glue them to the top of the stands for additional strength over a simple butt-joint.


For the carpets themselves I opted to glue some pictures obtained from the Internet directly onto the surface of the plastic base, then trim away the excess afterwards. I just modeled the top of the carpets and painted the underside a suitable colour. 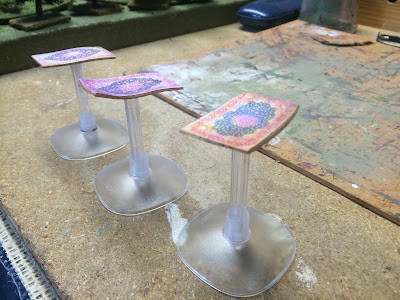 To complete the unit I painted some plastic Gripping Beast Arab infantry as these are what I had to hand. However the carpets are pretty robust and would easily cope with a metal figure.

The completed unit is done as a Large Cavalry Horde in Kings of War parlance. I've depicted all the crew with missile weapons as I struggle to see how a carpet would "charge" a body of formed men without coming off worse.  So they likely be used to depict a missile-armed unit.