The Blue and the Grey - ACW practice 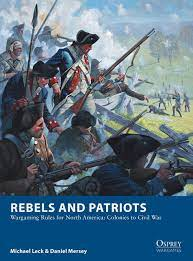 We're starting some ACW now as our latest campaign and are using Daniel Masey's Rebels and Patriots. These are a generic set of Horse & Musket rules for North America, so covering FIW right through to ACW and a little beyond. The main plus is they are pretty simple, and we know some of the core systems already from his Colonial rules. As we want to have up to 4 games running at the same time simplicity is key.

Masey has written a series of rules from Ancients through to Colonial all using a similar idea - units activate based on their quality using 2D6 and have a limited number of actions they can perform such as shoot, move, charge, rally etc. You only perform one of these a turn and failed activation test means they sit there for this turn taking whatever the enemy dishes out. There are a few oddities but it's a quick system with not much to debate as its IGO-UGO.

As this was practice week, we had a couple of games with two people who at least owned the rules beforehand. Both were a simple encounter game to allow a focus on the rules.

In both games the two sides pushed forward manfully into a hail of shot and shell seeking to close with the enemy. 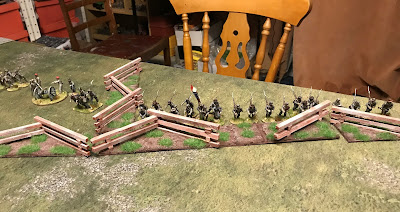 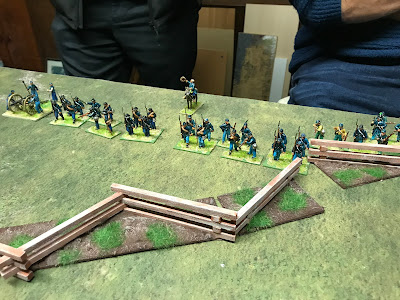 ACW is something I've always enjoyed the aesthetics of; the solid blue lines of the Union, the ragtag Rebels and the odd Zouave unit for colour. Limited cavalry also makes a change for H&M. 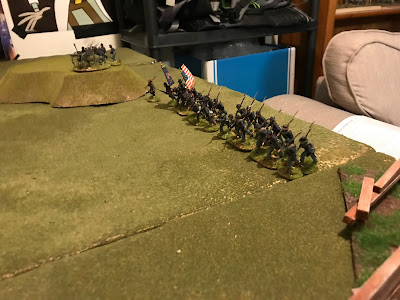 As these were practice games we did nt keep score, but they seemed to be fairly even levels of destruction by the end with neither side coming close to getting into combat. The rules do move pretty quickly though so we should get plenty of turns in once we're up to speed. 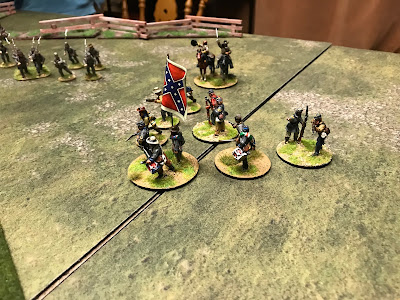 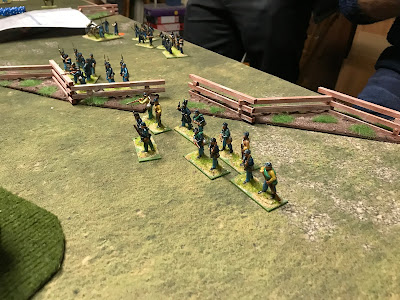 Inevitably we made lots of errors which would have affected how the games played but we noted a few things:

So some tweaks next week to make artillery less dominate and hopefully get some combats.