Shadow of the Eagles - the eve of the campaign

We're about to start a Napoleonic campaign based in central Germany, but it felt useful to try out the rough army sizes we plan to use to see if the games can be completed in an evening. I picked two armies typical of those we might use, in this case though the French had a few more points. To give some fog-of-war we deployed brigades alternately.

The Austrians had 5 Reg Inf, 2 Superior Inf, 4 Inferior Inf and a rifle unit. This was supported by 2 artillery, 2 Heavy Cav (1 Superior / 1 Regular) and 1 Reg Light Cav. Four brigades in total.

The Austrians deployed all their cavalry on the western side, with their infantry occupying the central sector and a refused eastern flank anchored on a large wood. Unusually the centre was mostly compromised of the Inferior troops. 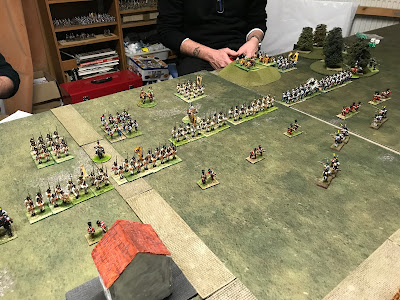 The French also deployed their cavalry in the west, lined up against their opposite numbers. They deployed a thinner centre with columns seeking to turn the eastern flank of the Austrians. 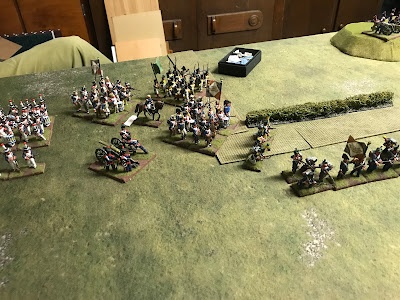 The game began with both sides advancing their infantry across the line. It was quickly clear though that the Austrians had made an error as Inferior units proved much less resilient than expected and began to fall back under French pressure. 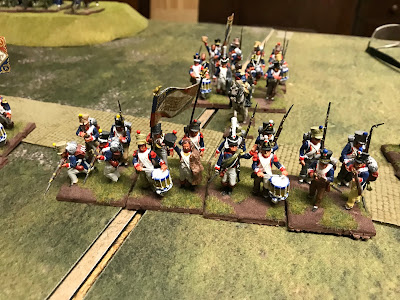 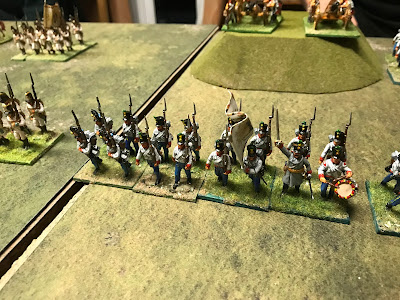 As the French infantry began to make attack it became necessary to break the stand off between the cavalry and move forward to over the flank of the advance. The initial luck was with the Austrians as the French failed to counter-charge and got hit at the halt.  With the Dragoons pushed back the Cuirassiers and Hussars had to intervene to stabilise the flank. The Austrians had the better of the action but critically were unable to intervene in the centre. 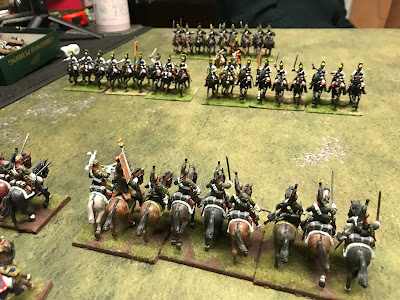 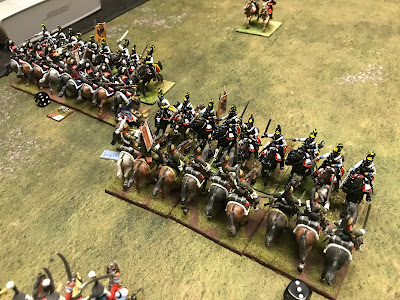 By turn 10 the Austrian centre had been put to flight and the French flanking force in the east was able to turn-in and begin rolling up the line. At this point the Austrians had almost hit break point so we declared the game a French win. 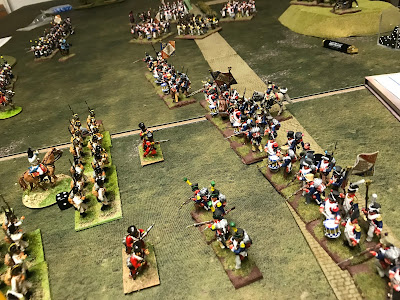 It was pleasing to see we could play a whole game from deployment to routing in about 3 hours. We managed 10 turns but could have got a few more turns in if we were more practised at the rules. Our main takeaway is that Inferior troops are even worse than we thought, so will need to be cheaper. so we're going for 0.5 points for Inferior Line vs 1 point for Regular and 1.5 for Superior.