Three days after the last battle the armies clashed at the village of Helmstedt, just east of Magdeburg. The French 2nd Division renewed its attack on Magdeburg but were intercepted by the Austrian 1st Div. A Prussian brigade was dispatched from Magdeburg to support the Austrians. 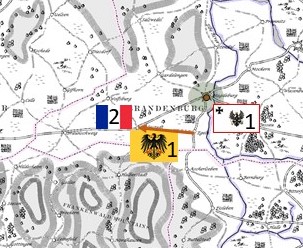 For this game we added some objectives each worth 2 routed units - the village in the French zone, a hill in the Austrian zone and a road junction in the centre of the board. Both sides fielded 3 infantry and one cavalry brigade.

Both sides lined-up with their cavalry in the east of the field and infantry in the centre. The Austrians adopted a defensive posture awaiting the arrival of the Prussians. The French were ordered to attack quickly to try and break through.

The French launched a strong attack in the east with their elite infantry brigade supported by the cavalry covering their flank. Centrally both sides advanced cautiously, preceded by their skirmishers. The Austrians had a slight numerical advantage in the centre which they hoped to exploit. 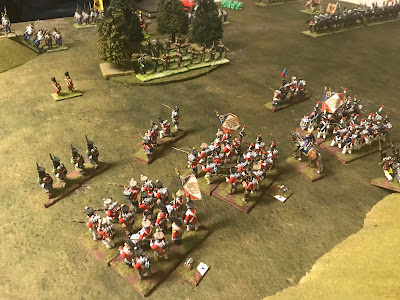 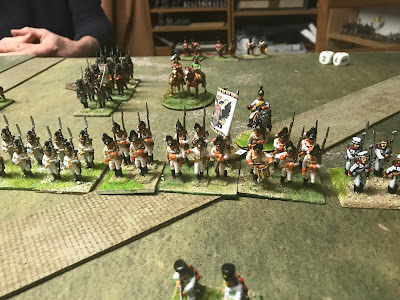 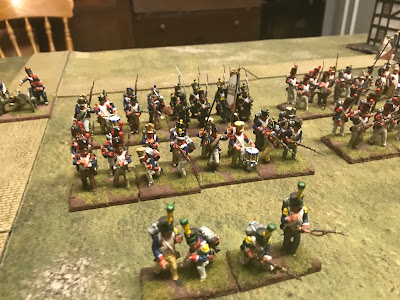 In a reversal of last weeks game the French (well Swiss actually) columns were able to sweep away some Hungarians and overrun the hill that was victory objective, before a smart about turn to face back into the field. The accompanying cavalry melee was pretty much mutually assured destruction, with the larger French force coming out on top but badly damaged. 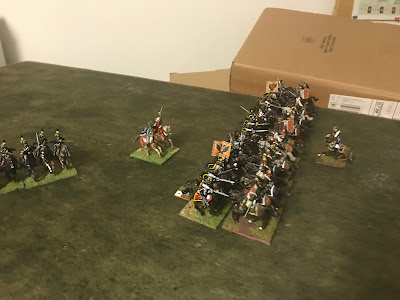 The evening ended after 5 turns, with the centre heavily contested but the Austrians more damaged overall. The Swiss had captured the hill but were down to a single battalion and were surrounded, but with units rapidly coming to their aid. As we start turn 6 the Prussian infantry have just arrived and so we will see what difference they make. 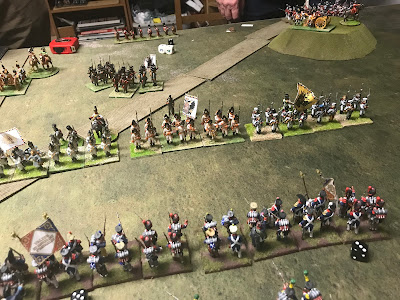 The plan is to fight on next week and see what the result is. Things are well balanced with roughly equal casualty levels.  The French have the better field position but the Prussians are all undamaged.
Posted by Wargamer Stu at 12:12