As the Abyssals lost the previous game they were granted an additional 150 points, giving them an overall advantage of 400 points. The scenario was Dominate, with victory points awarded for all units within 12" of the demonic temple after 6 moves.

Seeing I was outnumbered by faster units,  I focused on a tight deployment that would hinge forward using the Ancients on Rinosaurs on the right as my strike force. The Abyssals opted for a double envelopment, with the right composed of the flying units including the newly completed Twisted Victims (non-shambling Tortured Souls). 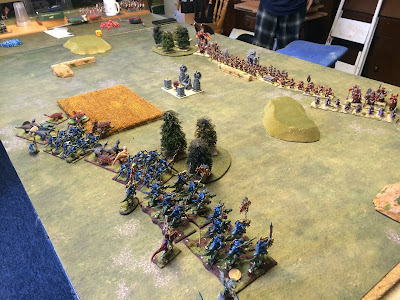 The Abyssals right pushed forward as expected so I refused left while I advanced with my Rinosuars, using the terrain to block double charges. I was also able to maneuverer the Skyraiders to flank and get some shots  Abyssal Horsemen. 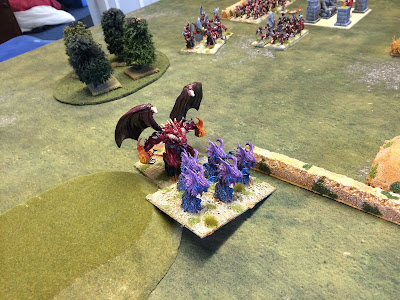 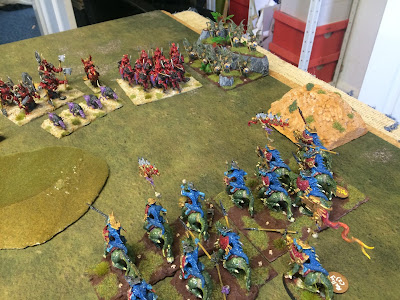 Centrally I was able to get a double charge on the Succubi and then get stuck into the supporting Abyssal horde, eventually chewing through it whilst refusing my flank. My newly commissioned Blizzard-Wizard did good duty, killed the Fiend after a few rounds shooting. 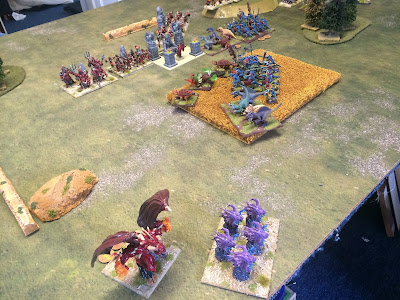 On my left the main attack did not go as expected though - a unit of Moloch demons with Brew of courage (24 * CS(2) attacks on 3+) routed both units of Rinosaurs and punched through a unit of Ancients holding the hill overlooking the demonic temple. They then went on to rout their 5th unit (Tyrants) before advancing on the temple. 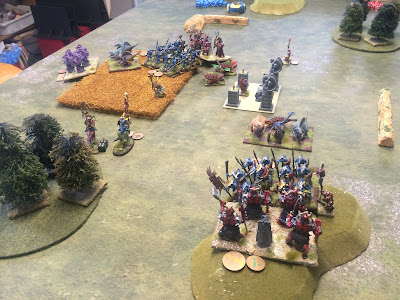