The Men Who Would Be King - some northwest frontier fun

As Santa had brought one of the chaps a consignment of North West Frontier troops we decide to try out Daniel Massey's The Men Who Be King rules from Osprey.  Like most of the rules in Mr Massey's stable it features a unit activation system where you need to roll to use units (usually a score of 5+ to 8+ on 2D6). If you have played Lion / Dragon Rampant you will know the system.

Two very welcome additions here though; firstly your turn does not end if a unit fails and secondly all troops have a "free" action they can perform without rolling e.g. Regular infantry can shoot or mounted can charge. This is very welcome as in the Lion / Dragon version bad dice could leave you in your chair without making a move, much like Jimmy White's snooker opponents!

We opted for a simple scenario - the Pathans were besieging a small British force in a fortified village and a relief force had to breakthrough to save them. 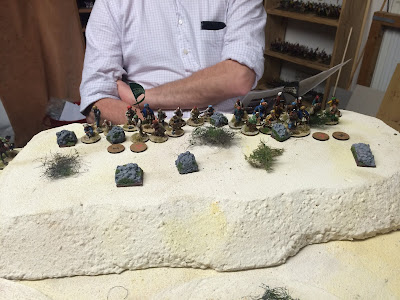 They met their end at the hands of a second unit of Pathan tribesmen but not before they had routed nearly half the enemy.

Whilst all this excitement was taking place the other half of the Pathan army set about bombarding the village and seeking to encircle it. The artillery was reluctant to fire (bad activations) but the Pathan riflemen kept up a steady fire on the defemders. 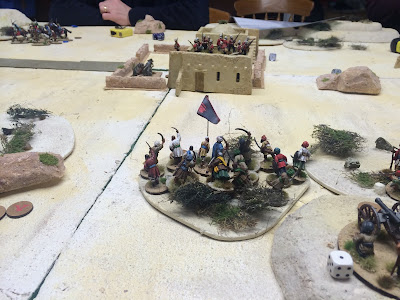 The British were able to hold-off two Pathan attacks but in the end numbers told and the third attack pushed them back and eventually broke them, leaving the compound in Pathan hands.

The Sikh relief column made steady progress up the table, keeping their formation tight for fear of an ambush from the plentiful scrub. 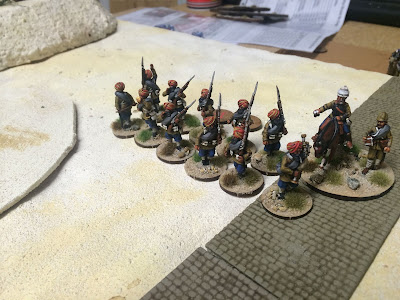 As they got into rifle range they began a steady fire against the Pathan's defending the village. There was a brief flurry when a last desperate Pathan cavalry charge tried to attack the rear of the column but it was easily seen off by rifle and artillery fire. 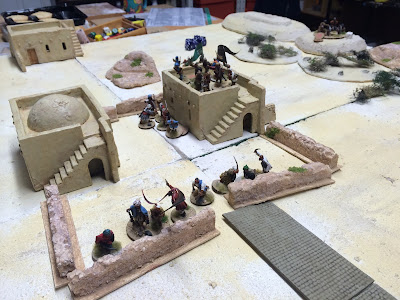 We concluded that although the Pathan's held the village they would not be able to withstand the Imperial attack and would have been forced to withdraw.

So a fun game concluded in about 2.5 hours. The rules are more at the "heroic" than "historical" end of the spectrum, but for fans of Colonial movies that's no bad thing. The Lancers proved devastating so its perhaps just as well you only get 1 unit per army.
Posted by Wargamer Stu at 13:57