The Crusades - A Kings of War Historic Campaign

This week we begin our latest campaign and so it seemed useful to publish the proposed rules. We'll be using Mantic's Kings of War with some of the campaign additions from Clash of Kings.


Short is the way, little the labour 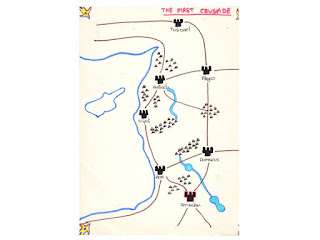 The First Crusade began when Emperor Alexios I of Byzantium requested western help in repelling the Seljuk Turks from his lands. Seeing an opportunity to recapture Jerusalem, Pope Urban II called the council of Clermont on November 25 1095 with the aim of raising an army. So it was that a Crusade was declared and several armies set forth to recapture the holy lands.


The campaign concerns the advance of two Crusader armies as they attempt to recapture Jerusalem from the Islamic Saracen forces. Each turn the Crusader attempt to capture a town and fend off a relief force. A 5,6 (D6) is needed to capture the town with +2 per the after the first. 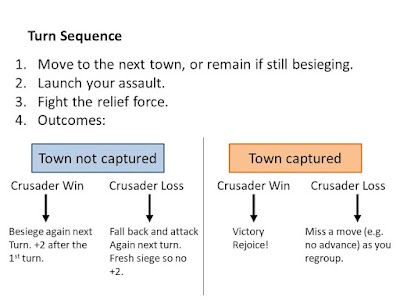 All games are fought with 3000 points. Initial army lists are provided and may be varied as the campaign progresses, with a maximum of 500 points changing.

Units can grow in experience as the campaign progresses and become more powerful. At the end of each battle the winner gets 3 experience rolls and the loser 1. You may have as many experienced units as you wish in your roster but a maximum of 5 can be fielded for each battle.


The capture of Antioch and Aleppo gives the Crusaders access to the following items. These items must be carried by a unit and may be lost to the enemy.