Our campaign begins with the northern-most of the Crusader armies attacking the town of Turbessel. As we were down to 2-a-side the forces were cut to 2500 and the table to 8 feet. The scenario selected for the relief force battle was Kill! So the side routing the most was the winner.

For this campaign we have introduced a new troop-type of Lance & Bow Cavalry to cater for the heavy cavalry used by both the Arabs and the Byzantines of this type. They are costed at 160 points for a Regiment.


The Saracens deployed second and so tended to match the Crusaders unit-for-unit, with a strong infantry centre.


The Crusaders deployed with the Byzantines on the right, supported by a unit of  knights. This would be the main assault for the Christians. The centre was occupied by infantry with more knights on their left.

The opening moves saw a slow advance by the knights and light cavalry on the Crusaders left, whilst the Byzantines focused on shooting-up the Saracens opposite them. Supported by the crossbows they quickly dispatched a couple of the mounted units opposing them

Whilst the Byzantines made good progress on the right, their Crusader allies became involved in  a charge / counter charge battle with the main Saracen cavalry force. Things swung to-and-fro with honours pretty even and the Saracens managing a few flank charges.

Centrally the Saracen infantry attempted to put pressure on the Crusaders but were subjected to a barrage from the crossbows that allowed the spearmen to follow-up and push back the Arabs.


In KOW when the end comes it pretty brutal and about 4 moves in the Saracens suffered a collapse across the line, with about half the army routed. We did nt bother with a final tally but it was clear the Crusaders has achieved a resounding win. 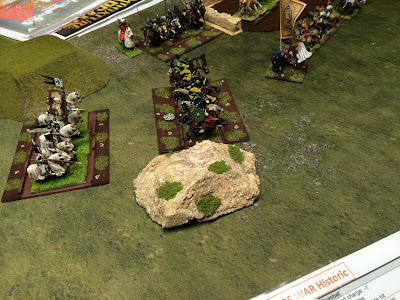 Our post-game analysis was that the Crusaders although mostly slower has been able to time their charges better and so gain a decisive advantage on the enemy.