Operation Merkur – the invasion of Crete

In May 1941 Germany launched its first (and last) major airborne operation of the war, aimed at capturing the strategically important island of Crete. This campaign focuses on the attack by Major Walter Koch’s 1st Btn Luftlande Sturmregiment against the town of Rethymnon, held by the 2/1st Australians under the command of Lt Colonel Campbell.


The campaign area is composed of a series of linked zones, with attacks being launched from zone to zone as denoted. There are a limited number of heavy support units so these are only available as reinforcements if they are in that zone: 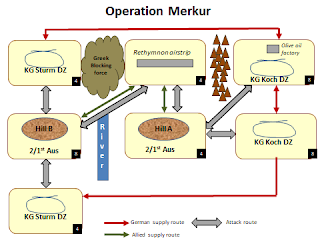 Hills A and B consist of 2 squares that must be captured, the first battle being an attack uphill and the second down hill. The airfield consists of hills guarding it and the runway itself.

Either side may secure a partial victory by claiming two of the enemy squares (Hills/runway count as 2) whilst contesting the others. Capturing 4 sqaures is a total victory 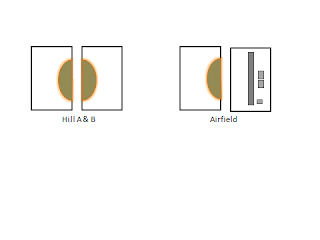 
The attacker must win in order to capture or remain in the square, otherwise the assault has failed. Should neither side win an encounter game then the battle is drawn and both fail to capture the square.


Casualties are NOT carried forward from game to game - this is an important sector so the whole battalion is available to support you.


o   Fired on or attacked


o   Enemy spotted in the open