This marked the penultimate game of the campaign and the final battle of 1864. Somewhat  outnumbered the Confederates fell-back to defend a river with a series of fords. There were two objectives near fords on the Rebs side.

Having four fords to defend the Rebs were forced to spread their forces along the whole front of the river, with guns scattered to give fire support. They dug-in in and so in most cases had some defences to ward off the Union attacks.

The Union opted to deploy the bulk of their infantry on the flanks and a large artillery park in the centre. Their plan was an intense bombardment  followed by an assault on the weakened enemy across the fords. General Haig would have been proud.


Under cover of the grand battery the Union infantry advanced on the enemy hoping to get in musket range  and add to the fire. The Union right was first into action but proved disappointing as they caused limited damage. The left advanced boldly but found themselves facing undamaged Rebs and so were forced into line to engage in musketry.


With the Rebs largely undamaged the Union settle into a steady fire from guns and muskets as the crossing simply looked impractical. Although loses were light on the Rebs side it was coming at a great cost as they were burning through command cards at a great rate as they sort to mitigate the damage from Union fire. 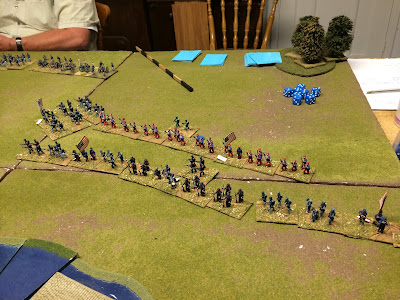 After a few hours play the Rebs had only 4 cards in their hard while the Union still had 12. It was clear that the Rebs would simply run-out of command cards and so lose the game that way. With no prospect of  serious damage on either aside the Rebs withdrew ceding the crossings, and victory, to the Union. 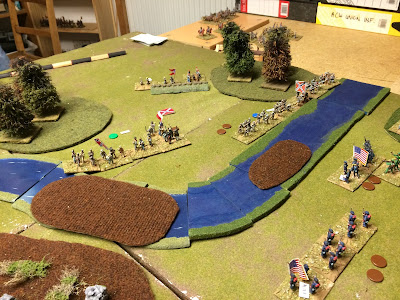