Over the weekend I visited Bristol and played the second of our occasional series of Saga Crusades games, again featuring my Saracens vs the Milities Christies.  The scenario this time was Holy Ground, in which points are awarded for holding terrain, more for those in the centre / opponents half. The scoring scheme works such that you can nt accumulate more points than the Turn number, so holding terrain later potentially has more value than early.

My plan was a simple one as seems best for Saga. The levy foot would advance a short distance and secure my objective. Ghulam's flanked by horse archers would head for the central hill and if a chance presented it perhaps grab the enemies objective. I hoped to benefit extensively from my abilities that favoured shooting then charging (Brotherhood) and from those that boost combat such as Coordination and Damascus Steel.  Being equipped composite bows gives the horse archers free shots but at the risk of accumulating Fatigues. 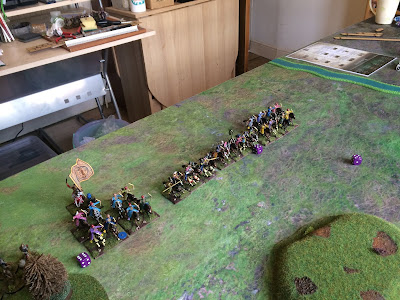 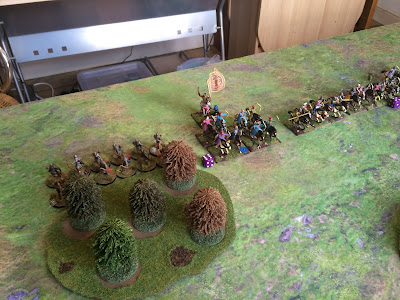 The Milties Christies plan looked similar. They looked to capture their own objectives with some crossbows. Knights and foot sergeants looked to attack the hill with a further unit of Knights as a reserve. 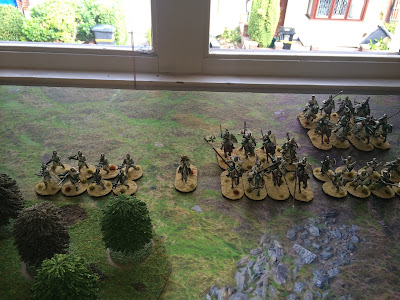 I was lucky enough to win the initiative and so pushed rapidly forward to capture the hill in the centre for the glory of Saladin. Predictably the Knights charged headlong into my Ghulam's but I had saved sufficient dice to use Coordination (additional att/def dice). Some decent rolling saw the Knights bounce off with heavy losses, which largely ruled them out of the game. 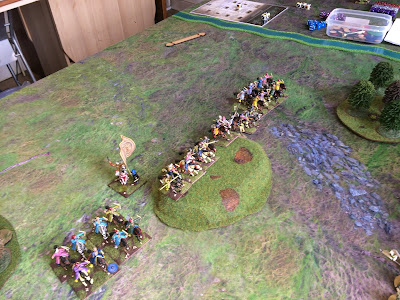 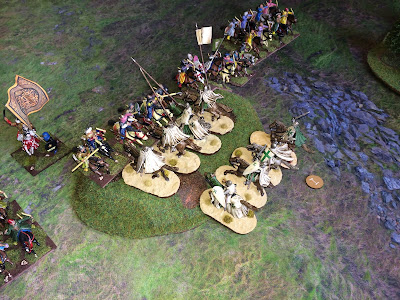 Seeking revenge the Crusaders launched a fusillade of crossbow fire against my horse archers scoring 4 hits and needing 2+ to kill. It seems though that Allah was smiling on the Turkmen as the Crusaders rolled double snake-eyes to score no hits!

I retorted with 2 rounds of fire and manoeuvre from the horse archers on the right. Chainging together free shots from composite bows and Multiple Shots plus damaging shots from Armour-Piercing Shafts, with some fatigue recovering moves from Thoroughbred I was able to chip-away at several units and badly wound the warlord without being in any real danger of attack.

Falling behind in the points, the Knights launched second unit up the hill into my depleted  Ghulam's, destroying them but being badly damaged in turn be a second unit of Ghulam's and finished off with further horse archer fire. 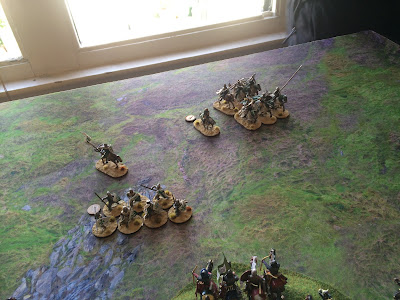 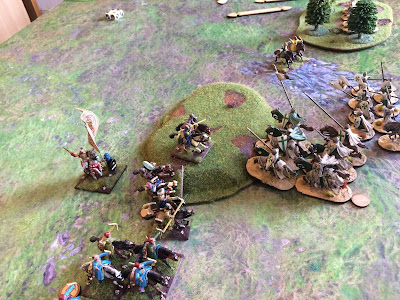 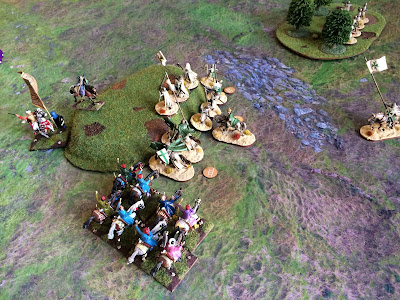 The game ended with the central hill contested but crucially the Saracens had too big a lead to be overtaken by turn 6, so the battle stopped a turn early. 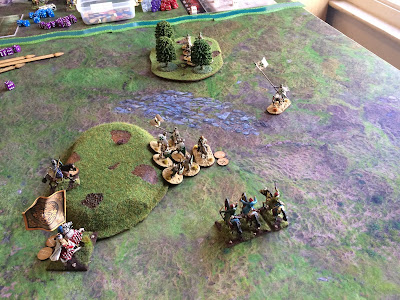 An interesting game and one that featured much more of the horse archer tactics from the Saracens than the previous one. The scenario and dice (lots of uncommons / close-packed enemies)  favoured the use of the Multiple Shots and Armor-Piercing Shafts more than the first game. I even managed a Ruse at one point to prevent the use of a powerful Milities Christie ability than gives 6 additional combat dice if charged.

The Milities Christie seem much harder to use than the Saracens, especially the balance of using/not the Orison ability. This generate a pool that can be used to mitigate hits, thus potentially swinging a combat. However stacking the pool limits other options that move so you need to plan ahead carefully.
Posted by Wargamer Stu at 09:13