This weeks battle was an encounter game in which both sides marched on to the table and then deployed to capture some key terrain points as well as engaging the enemy. In this case the crossroads and a village were the objectives. Cavalry must enter the table first and no field artillery is allowed as they are slogging along at the back of the column. 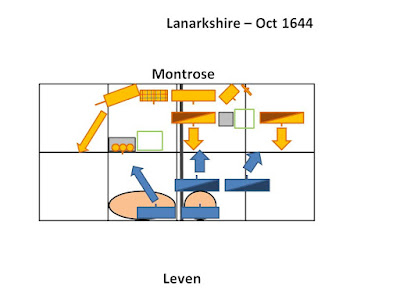 Both sides adopted a fairly conventional approach and advanced on the table with their Horse to the front and attacked the open area to Montrose left. The Royalist Forlorn Hope quickly grabbed the village on the centre-right of their position. As the infantry columns toiled onto the table the cavalry battle was joined.

Despite being slightly outnumbered the Covenanters Horse had the better of the early exchanges and began to push forward. However as often happens in cavalry melees things swung backwards and forwards until eventually both sides largely nullified each-other. Whilst this was occurring the opposing infantry forces deployed and made ready for battle.

Once the Horse had cleared the battlefield both sides Foot came to grips. On this occasion Montrose held back and forced the Covenanters to approach them through a slightly constricted position. Having dispatched some pesky Highlanders the Covenanters found it harder going as they were flanked by Montrose Foot. Blows were traded fairly evenly despite the Covenanters having a slightly poorer position.


With a draw looking likely both sides enjoyed a last hurrah by launching a cavalry attack. The Covenanters Trotters charged into a fresh unit of Gordon's Foot but were halted by the steady pikes. Montrose had more success as he managed to catch a column of enemy Foot deployed in march column.

The battle ended with darkness drawing-in and neither side able to force a victory, so a Draw was agreed.

As the battle was drawn there is no change in the overall situation. 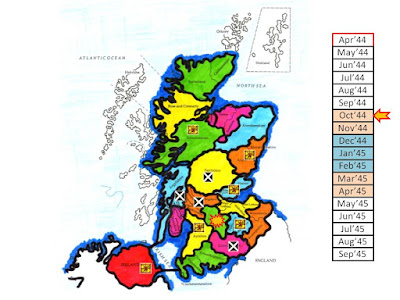