This weeks battle  required a little more movement than some and is inspired by Grants reinforcements off-table scenario. For this battle the Covenanters started with 25% of their troops garrisoning a fortified church complex and 50% of their forces trying to breakthrough. Montrose was free to split his troops between assaulting the defences and holding off the relief force as he saw fit. The winner was the one holding the church at the end. 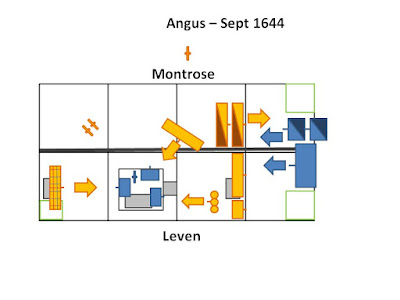 Montrose deployed with his best assault troops facing the church supported by the Field guns. The Highlanders deployed opposite the side of the church with the Irish Brigade facing the more challenging front. On the other side the Forlorn Hope was poised to attack. This week Montrose decided to play The Brewery territory card - this gives a unit  +1 in combat and morale, but you must advance at and attack the enemy along with the accompanying beer wagon.

Facing the relief column was the Horse and the weaker Gordon's Foot with the support of a Light gun.


On Montrose left the Covenanter relief column arrived and pressed forward with the Horse in the lead. In a reversal of recent battles it was Montrose Horse that had the upper hand, destroying the leading Covenanter squadron and pushing back the remaining Horse. Combining well with the Gordon Foot they were able to pin the relief force back, who were hampered by the fields on their flanks.


Over at the church Montrose began the battle with an ineffective bombardment against the defences before beginning his advance against the garrison. On the right side of the church the somewhat intoxicated Highlanders advanced quickly and with a 2-1 advantage were able to force their way across the defences. On the left side of the church the Irish Brigade advanced and commenced a fire-fight against the defenders. Despite the cover the garrison lost a regiment of Foot fairly quickly as 3 of Montrose foot focused their fire. After a brief struggle the garrison was routed and the church complex captured for Montrose.

This was a forth win for Montrose putting him 6-4 ahead on territories controlled. 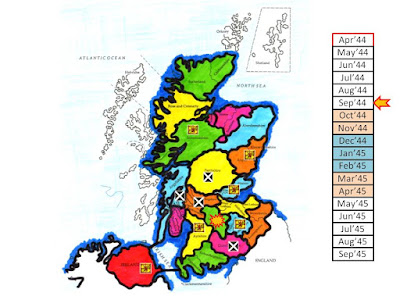