A fairly straightforward affair this week as the scenario generator produced a Pitched Battle. Both sides clash head-on but to add some uncertainty, deployment is done behind screens and then revealed. Both sides also place an objective in each sides half that counts as a routed enemy unit if captured. Victory is achieved by routing 50% of the enemy forces. 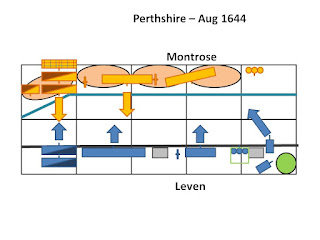 Montrose deployed along the ridge-line behind a stream. On the right were massed the Horse and Highlanders with the Irish Brigade in support. On the left were the lower-grade Gordon foot. The plan was a simple one - to beat-back the Covenanter Horse through superior numbers and turn the flank the position. Meanwhile the weaker left would be refused to allow time for this to be completed.
The covenanters deployed with the bulk of their Foot in the centre. The Horse were on the left (opposite Montrose mounted) and half a Foot brigade deployed on the right to attempt a flanking manoeuvre.


The battle opened with a swift advance to combat by both sets of Horse. Honours were fairly even between the two sets of Trotters but the Covenanter lancers proved deadly and destroyed a squadron of Montrose Horse for very little loss. Things got worse for Montrose as both sets of Covenanter Horse gained the upper hand, pushing him back onto the Highlanders.


In the centre the Irish Brigade advanced to support the Horse and soon began a fire-fight with the Covenanter Foot. Although well positioned the Irish shooting proved disappointing and casualties soon began to mount against them. Meanwhile on their right the Covenanter Foot advanced steadily and eventually came in range of the weaker Gordon  Foot holding the heights.

﻿
As the game drew to a conclusion Montrose superiority in Horse began to tell and they were able to force their opponents back. It was however too late, the beleaguered centre was all but gone and the Gordon Foot began to wobble. By now every Royalist commander apart from Montrose was also dead or wounded. Sensing that defeat may be close Montrose ordered a retreat and left the field to the Covenanters.
Montrose plan was a reasonable one but came unstruck as the mounted could not achieve a rapid enough victory to threaten the Covenanter foot. Some poor shooting from the Irish was then enough to seal their fate.

This was the Covenanters second  victory meaning Montrose is ahead 5 territories to 4. 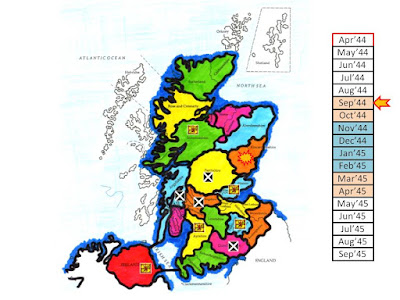