Following last week's draw both sides once again contested Lanarkshire. The game involved a meeting engagement with both sides trying to capture two vital river crossings. In addition there was the possibility that one side might discover a previously undocumented ford and so be able to force an additional crossing. The weather for this battle was heavy rain, meaning no volley fire and no long range artillery fire. 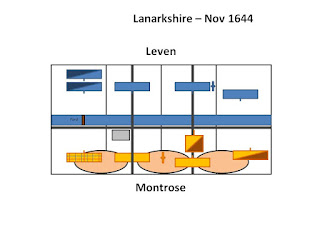 Given the scenario there were limited options for both commanders, the main choices being about what forces to devote to the search for the ford. The Covenanters deployed with infantry facing each bridge, Horse on their right, and more infantry on their right. Montrose deployed with Horse ready to storm one of the bridges and also search for the ford on his left. The Highlanders were deployed on his left.


The deployment on the flanks very much favoured the Converters on this occasion. Lacking any distance shooting Montrose Horse on his right were forced to withdraw and not search for the ford for fearing of simply being picked-off. On his left Montrose highlanders lack of distance shooting meant they could not hinder the Covenanter's Horse.
On the right-hand bridge Montrose made a vigorous charge straight across the river, forcing the Covenanter foot into pike stand and tying down most if that wing. The Covenanter shooting eventually told for the leading squadron of Montrose Horse, but the second squadron was able to charge some infantry in the flank, routing them, before going on to attack some Horse lurking at the back. The delaying action meant that Montrose was initially able to dominate this bridge but he was unable to force a victory. so the right-hand bridge remained contested throughout the battle.

On the left-hand bridge both sides settled into an extended firefight that last most of the game. Numbers were equal but Montrose seemed to have all the advantages of superior morale, artillery support, and cover for one of the regiments. Despite this the Irish Brigade, as so often, found itself outshot and eventually the centre regiment broke. At this point numbers told as the Covenanters were able to bring-up reinforcements and force a crossing. So the left-hand bridge fell to the Covenanters.


On the far left both sides advanced, with the Covenanter Horse locating the ford after a few turns. The Highlanders moved to block them and sealed the flank of Montrose position. Despite being at a disadvantage the Highlanders were able to contain the enemy Horse for the remainder of the game.

So in the end a victory for the Covenanters by 1 bridge to 0.  In our post-match analysis we concluded this was a good scenario for the Covenanters as they had a significant advantage in quality and quantity of Foot regiments overall, despite the Irish Brigade. In this game the Highlanders lack of distance shooting told against them. 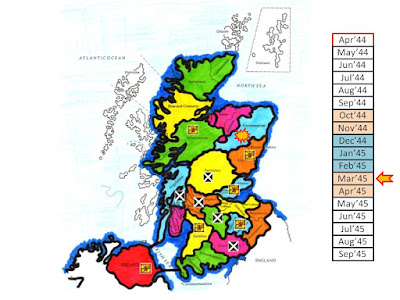