This week we were joined by another guest who is usually only able to play during our weekend games. As a stunt double for Labour leader Jeremy Corbyn, this is an especially busy time, so we're grateful he was able to attend. As a special treat be brought along some of his recent painting including some Thirty Years War Cuirassiers.

In this scenario both sides infantry met whilst their Horse was our scouting for the enemy. Both sides Horse then rushed back to the battlefield arriving on opposite sides of the table. So essentially both sides have a flank attack against the other. The winner is the first to rout 50% of the enemy. 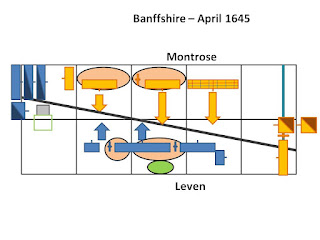 Both sides adopted a fairly similar deployment as they deployed with infantry holding the available high ground with guns in support. Montrose those extended his line so that his Highlanders slightly outflanked the Covenanters line.


The two sides adopted different approaches to their flank attacks though. The Covenanters led with their Horse, seeking to crush the flank held by the Irish Brigade.

Montrose led with his infantry, seeking to pin the Covenanters whilst the Horse and Highlanders attacked the dog-leg in the line.

The game opened with the Covenanters Horse launching an all-out assault on the Irish Brigade holding the flank of Montrose line. The Veteran Irish were able to blunt the initial attack and then blazed-away at the Covenanter Horse. Some strong shooting, combined with poor morale from the Covenanters, led to the attack bogging-down causing only limited damage.

Over on the other flank Montrose attack faired much better. A combined infantry and Horse attack was enough to pin the Covenanter Foot. This proved fatal as the Highlanders charged into the defenders flank and began to push them back
﻿﻿﻿﻿
More centrally ﻿﻿﻿﻿there was a rare event when Montrose Foot managed to comprehensively out-shoot the Covenanters leaving a gaping hole in the centre of their lines.

With their flank attack stalled and their centre in retreat it was clear that the Covenanters could not win the day. So they withdrew into the gathering April gloom.

Having achieved another victory Montrose now pulls into the lead controlling 8 territories to the Covenanters 5. 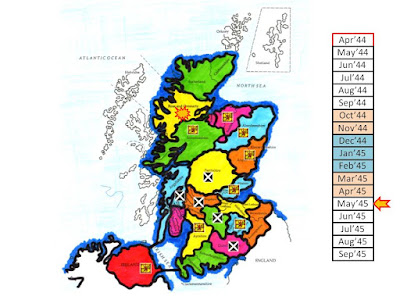