Following a period of inactivity during the inhospitable Scottish winter (which it turns-out is much like the English summer of 2016) hostilities recommenced with a Pitched Battle for control of Aberdeenshire. A simple scenario in which the winner must route 50% of the enemy. 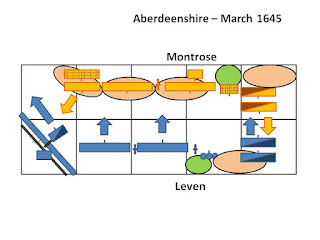 The Covenanters choose to anchor their position with one flank resting on a fast-flowing river and the other on a small wood. This meant they had ceded the high ground to Montrose. The wily Royalist commander could immediately see that this meant any attack by him would be channelled into a narrowing gap and would be subject to flanking fire. The Covenanters also had superior artillery which would be damaging at close range. So unusually Montrose choose to defend and nullify the advantages in the enemies position.

Taking-up the challenge, the Covenanters advanced across their front, hoping to turn Montrose right flank by attacking the Highlanders.

On their right the Covenanter horse clashed with their opposite numbers in a cavalry battle that was to last the whole game, with both sides effectively cancelling each other out. We've found that cavalry melee can be fairly lengthy unless one side has some luck early on.

In the centre, the Covenanters Foot moved into position  and began a firefight with the Irish and Gordon's Foot lining the hills. Honours were fairly even at first, with Montrose's artillery proving ineffective despite the short range

On the left, the Covenanter's attempt to outflank Montrose were thwarted by advancing enemy Foot and the unexpectedly strong resistance of the veteran Highlanders against the Covenanter trotters.


Eventually the Covenanters began to waiver, with them being outshot for perhaps the first time in the campaign. For once Irish Brigade escaped serious damage and Alastair McColla was able to escape injury. The game ended as a rare defensive victory for Montrose as Covenanters streamed from the field to escape into the growing darkness.

With the first battle of 1645 going to Montrose he is now once again ahead by two territories controlling 7 to 5. 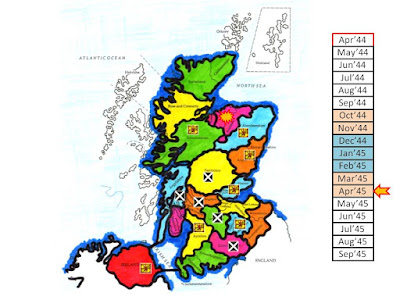