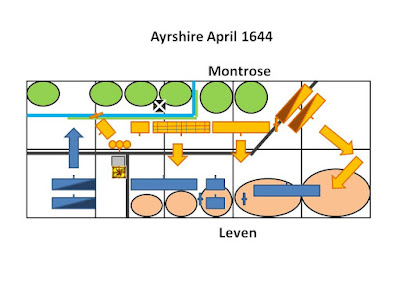 The scenario generator produced a pitched battle in the rain for this first encounter. So a head-on clash with both sides trying to rout 50% of their opponents from the field. Due to the rain the most powerful Covenanter strategic advantage (free volleys) was largely useless. Perhaps the poor weather would be to the Highlanders advantage?

Deployment for this game was done behind screens, and both sides chose to mass their cavalry on their left flanks. So this meant that both would be facing off against enemy infantry. The Royalist concentrated their Highlanders in the centre. Montrose was lucky to have a Forlorn Hope which can deploy upto half-way across the table - this was position ready to snatch the farm-house just inside the Covenanter's half.

﻿ The battle opened with the Covenanter horse pressing forward in an attempt to turn Montrose' right flank and get behind them.  Montrose responded by refusing the flank with the Gordon Foot and forging ahead with a central attack using the Highlanders and Irish Brigade. The Gordon Horse held back, not fancying tangling with the Covenanter foot holding the hill line.

.
﻿ On the Royalist right the Covenanter cavalry began their out-flanking maneuver but the terrain forced them closer to the Gordon foot than they would have liked and casualties began to mount. Although morale was good they were unable to mount a telling attack.

﻿ The central attack by Montrose initially met with mixed success. The Irish Brigade found themselves outnumbered  but through superior morale were able to resist the Covenanters counter-attack. In the centre the Highlanders proved as erratic as usual - one unit broke through but two were quickly routed. At this stage honours were fairly even.

﻿ On the Royalist left the patience of the  cavalry commander finally bore fruit as he noticed a gap in the defensive line. Steady infantry provides a tough targeted for cavalry but by attacking with 4 squadrons at once he was able to secure a much needed victory and breach the line.


﻿ With the Covenanters flank turned and Highland unit loose in their rear they decided to withdraw and fight another day. In the end a close battle with perhaps luck favouring Montrose on this occasion. Certainly having a Forlorn Hope available and an important target to seize disputed the Covenanter's own cavalry attack.

First blood to Montrose who now controls three territories - giving some addito0nal reinforcements and a strategic effect for the next battle.