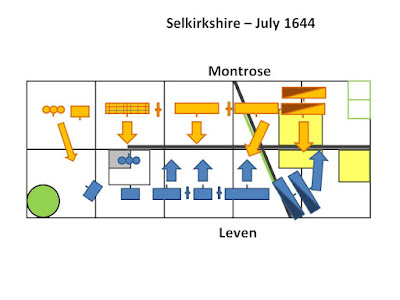 This battle saw the Covenanters out-manoeuvred by Montrose and facing a possible double envelopment. As with a Flank Attack upto 1/3 of the attackers forces can be sent on a flank march, but in this variant both sides may be attacked not just one.

Somewhat fearful of the double envelopment the Covenanters deployed in a slightly deeper than usual formation with guns between the brigades. Cavalry guarded the more open right flank, whilst the Forlorn Hope occupied the manor house. Montrose decided to forgo the flank march and instead focus on a two-pronged attack. The Irish Brigade and Horse would attack the likely corner on the Covenanters right and the Highlanders would  manor house with flanking support.


The battle began with an all-out assault by the Highlanders on the Forlorn Hope in the manor house. The Forlorn Hope's shooting was fairly ineffective but Montrose artillery had a rare success causing them to be become Shaken. With a skirl of the pipes the Highlanders fell upon the unfortunate musketeers and quickly routed them. Their blood clearly up they contained their attack and managed to eject the supporting infantry regiment from the grounds of the manor house.


On the Covenanters right both sides advanced their Horse and executed a charge, as is often the case with cavalry combat it was a to-and-fro affair. Montrose lancers smashed their way through their opposite numbers assisted by some excellent saving throws. Conversely Montrose trotters failed to charge and were pushed-back by their opponents. Honours fairly even in the cavalry melee.
Over on the Covenanters left the Highlanders completed their captured of the manor and with the support of the Dragoons and some infantry managed to rout a further two units, turning the flank.
In the centre and right Montrose managed to execute his attack on the dog-legged Covenanters line. On the flank itself the attack went pretty well, with the Irish Brigade managing to outnumber the enemy and score significant hits.  However you can nt be strong everywhere and Montrose had deliberately weakened his centre to enable the flank attacks. Unable to withstand the Covenanters advance the centre eventually collapsed.
The successful flank attacks were however enough to rout more than 50% of the covenanters, forcing them to withdraw from the field.

A close-fought battle with the Highlanders for once proving successful, aided as they were by some poor morale for the Covenanters which meant they were always Shaken when attacked.

Montrose scored his third victory of the campaign and so now controls 5 territories to 3. 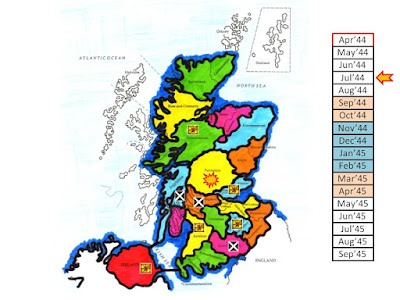