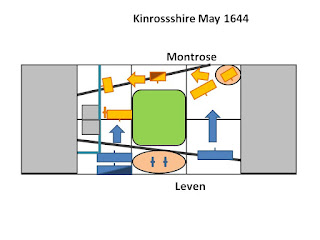 This battle featured a rear-guard action under cloudy sky's. Surprised by the Covenanter forces whilst on the march Montrose mounted a delaying action whilst his baggage and half his army sought to escape. In this battle a D6 is rolled each turn and once it totals 24 the baggage has escaped. So speed is of the essence for the attackers even though they have a 2:1 advantage.

Montrose deployed his forces either side of the dense wood that filled the middle of the field. This wood was impassable to close-order troops so effectively split the field in two. On his left he deployed the Irish Brigade. On the right the Gordon Foot was given the stronger position protected by the river. Leven massed his forces opposite with guns in the centre and Horse behind them.


The game began on the Royalist right with the artillery opening a fairly ineffective cannonade, and then the Covenanters advancing to long-range before opening fire. On the Royalist left the Irish Brigade staged a withdraw, seeking to keep the gap beyond musket range.

On the Royalist left the Irish Brigade continued to back-peddle , thus preventing the larger Covenanter force coming to contact. Once safely behind the wood they turned and began to exchange fire on fairly even terms. On the opposite flank Montrose infantry actually got the better of the fire-fight as they enjoyed short-range supported from their own light gun.


As the dice clicked-around to 24 the situation was stable for Montrose, with both flanks in reasonable shape. So a victory for Montrose in the second battle. In hindsight perhaps the Covenanters should have been more aggressive and not hoped for so much from their artillery.

For future playing of this scenario we will allow the attacker to deploy a little closer (12" verses 16") but not allow any charges in that first go.

With a second victory Montrose now controls 4 territories to 2. As a maximum of 3 territories can be "played" in a given battle they will need to chose their best 3. 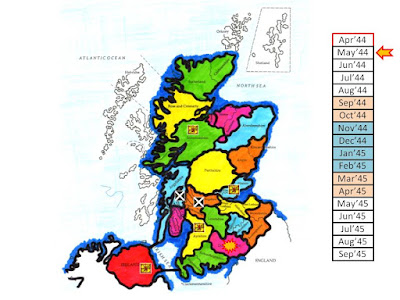