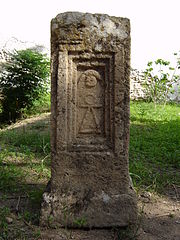 As I gradually build-up my Punic Wars forces I'm keen to provide camps for the two sides. As well as being decorative it will add some additional objectives for use during the games.

The Roman's are easy as the marching camp is pretty well documented and its visually fairly appealing. For the Punic forces though the "realistic" option is probably gaggle of tents and rough lean-to's, which did nt seem very inspiring. So I turned my thoughts towards a temple as a more appealing item. Details are pretty sparse on Punic religions beyond the odd stele of Tanit, the Phoenician mother goddess and city deity of Carthage.

So I decided that a fairly generic Greek-style might be the best bet. The model is an open temple with alter and a few statues.

The basic constriction of the temple is my usual foam-core. For the pillars I've used 5 inch cake pillars. In this case Wilton Grecian pillars obtained from Amazon at £5 for 4 pillars.


For the roof I've used my normal method of gluing individual card tiles down. Its pretty time-consuming but gives a good texture when finished, so is worth the effort.

﻿﻿﻿
The completed temple was painted, washed, and then dry-brushed in a suitable sand-colour acrylic. The flagstone effect was achieved by carving-out the flagstones using a ballpoint pen and then washed with paint.

The alter and statues were done in a grey colour so they would stand-out from the temple itself. The figures are Citadel figures from the late 1970's used for Chaosium's RuneQuest RPG. They are mythical Greek looking at as true 25mm's not really suitable for the battle-line anymore.