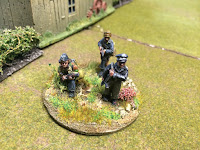 As we've the luxury of a long weekend we decided to run a third game of Chain of Command. This contest pitted Oberst Kurt Stiner's fallschirmjäger against a platoon of Red Army infantry under Leytenant Nigelski We opted for a simple encounter scenario fought across Russian farm-land, so clearly before Steiner had made himself unpopular with the high-command.

The Patrol phase yielded a slightly better position for the German's, with them closer to the farm, however the Russians did have a decent flanking position.


The game opened with the Germans deploying squads just behind the farm and in field covering their right flank. The Soviets responded with an infantry squad on their left flank in the woods and 2 * maxim MMGs in cover on their base-edge opposite the farm. In the early exchanges the Germans had the better of the shooting, damaging the Soviet squad on their flank.
The Germans took the early initiative advancing their central squad into the farm-house and opening-up on the Soviets deployed MMGs. Their early fire was not especially effective though and they soon found themselves under fire from both maxims and a sniper team. Casualties soon mounted under this onslaught.
Eventually the pressure on the German squad in the farm-house became unbearable and they became first pinned and then broken. At this point Steiner showed his mettle and dashed across open ground to try and rally his broken squad. It left the gap open for the Soviets though who quickly deployed a squad and advanced it rapidly into the now abandoned farm.
Sensing a clear advantage the Russians occupied the farm and advanced their flanking squad into a supporting position. They turned a maxim on the Germans in the corn-field and kept-up some pressure on the broken squad. A persistent failure to roll well enough for a turn-end meant though Steiner's squad was just about hanging in there and could not be routed.

In desperation the Germans deployed their final squad opposite the farm and commenced a lively fire. This was sufficient to push back the Soviets in the farm-house but was not enough to save the day as the final Soviet squad moved into a flanking position. We ended the game with a Russian victory - not bad for Leytenant Nigelski's first game

Another enjoyable game of Chain of Command with all agreeing it was a fun encounter, completed in about 3.5 hours. The decisive factor this time was that the Soviet maxims were well sited with good fields of fire - with some infantry and sniper support they accounted for two German squads. German shooting was perhaps a little unlucky.

The real winner was probably the farm-house which acted a bit of troop magnet and accounted for the better part of three squads.